“Whenever people are targeted for who they are – whether it be because of their race, their ethnicity or nationality, sexual orientation or gender identity, if it’s because of their sex or disability or appearance or size, if they are singled out for their economic status or their immigration status – it is wrong,” said Dorothee Benz in her opening remarks at My Brother’s Keeper: People of Faith Confront Hate Crimes. “It’s an offense to the diversity and wonder of God’s creation. And as God’s people called to mirror God’s radically inclusive love in the world, we are here today to do something about it.” 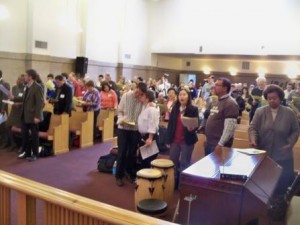 The sanctuary at Grace UMC is filled with the voices of over 150 United Methodists including clergy, district leadership, laity, and youth.

Thus began an extraordinary day on Saturday, November 20, as 150 people from across the New York Annual Conference gathered for a ground-breaking event to talk about the problem of hate violence and articulate a Christian imperative to respond. The day was opened and closed in worship, rooting us in the liberating message of the Gospel and the belief that God calls upon us to defend and welcome all the oppressed and marginalized.

The full program in English. And in Spanish. And Korean.

We were welcomed by Luisa Martinez, pastor of the Spanish and English congregations of Grace UMC in Manhattan, which extended its radical hospitality to us. Among the attendees was Bishop Jeremiah Park, who also extended greetings.

Joshua Noblitt offered a meditation reflecting on his own experience as the victim of an anti-gay hate crime in July. The encounter put him at a spiritual fork in the road, he said. One path before him and before all of us is the path of fear, which counsels retaliation, suspicion and building barriers to try to protect ourselves. The other, the path of love, seeks justice and understanding and breaks down barriers. Walking down this path, Noblitt wonders about the teenagers who attacked him, what led them to that moment, where did they learn to hate gays? At home? In church?

The keynote panel for the day, “How is the hate supported in church and society? How is the hate countered?” picked up on this uncomfortable question. Christianity has been the face of love and a force of liberation, but historically it has more often been a force of oppression and domination. Moderator Traci West and panelists Terry Todd, Rosario Quinones and Fred Brewington explored this dualism in a variety of ways – how it has played out in racist, anti-immigrant and homophobic currents in U.S. history; how the Bible has been both a tool of liberation and a tool of violence; and the reality of hate violence and the inadequate vocabulary we have as a society to talk about its underlying causes.

An afternoon performance of “What killed Marcelo Lucero?” by the Teatro Experimental Yerbabruja offered a sobering and graphic look at the violent consequences of rising anti-immigrant rhetoric and politics. The play re-enacts the escalating hostility and resentment of white Long Islanders and the corresponding increase in harassment and violence, anger and suspicion experienced by Latino Islanders, a combination that led to the 2008 murder of Lucero by a group of youths out beating up Latinos for sport.

The performance was followed by a discussion of what we can do, individually and collectively, to end the violence. Structured discussion continued in a time of small group conversation but dialogue and connections were happening all day – in the hallways, at lunch, during the love feast in the closing worship and even after the event ended.

One thing that was clear from every presentation and discussion throughout the day was the close connection between words of prejudice or exclusion and acts of violence. This realization again brings the role of the church into stark contrast – the UMC’s doctrine that “homosexuality is incompatible with Christian teaching,” for instance, or the habit of too many Christians to use Biblical texts as weapons of exclusion and domination. In the end, it was clear to those gathered at My Brother’s Keeper that we stand in that minority tradition in the church that challenges oppression and violence and that we must go out and act in that tradition.

Many of the discussions turned to the question what can we do, concretely, individually, in our congregations, in our communities? My Brother’s Keeper researched and compiled a series of resources that participants could take back with them as tools to help with this task. We agreed that the day was not the end but really only the beginning of the work. The work begins, as Margarita Espada from the Teatro Experimental Yerbabruja put it, “at the kitchen table,” challenging bias and intolerance within our families, and it continues from there. Event organizers encouraged participants to share ideas, commitments, questions and experiences on the My Brother’s Keeper Facebook page.

“Our church has a voice,” said Fred Brewington. We must use it to speak out against injustice, hate and violence, and to educate ourselves and our communities. “This is a good start,” he added. “We have a lot of work to do.”