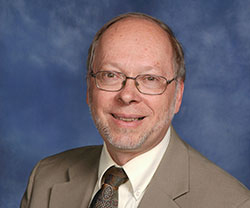 Timothy J. Riss is a United Methodist by choice. His father was a Lutheran pastor who later became a Presbyterian; his mother, a Juilliard graduate, played the organ for Lutheran, Presbyterian, Reformed, and United Methodist churches. When he was 15, he chose to join the Ardsley, N.Y., United Methodist Church. He earned a bachelor's degree at the University of Rochester, N.Y., where he majored in psychology and minored in mathematics. His master of divinity degree is from Colgate-Rochester Divinity School/Bexley Hall/Crozer Theological Seminary, an American Baptist and Episcopalian school.

Tim's work experience includes three summers as an intern at the Population Council of Rockefeller University in Manhattan, 1 1/2 years with the U.S. Postal Service in Rochester, three years as student assistant at the First Presbyterian Church of East Rochester, and 34 years as the pastor of United Methodist churches in New York: Fleischmanns and Halcott Center, Franklin, Catskill, Smithtown, Hicksville, and Poughkeepsie. His appointments began in a cooperative parish in rural New York before moving to suburban and urban pastorates.

In the New York Conference, he has served as the chairperson or co-chairperson of six groups, including the Board of Ordained Ministry (1996-2000) and the Council on Finance and Administration (2007-2012).

Tim married his best friend, Genie Abrams, in 2002. He is the father of Jon and Sam and the stepfather of Rachel, for whom he thanks God every day.