The Voices of Sandy Recovery — The Fact They Cared Was Wonderful

The Voices of Sandy Recovery — The Fact They Cared Was Wonderful

George Morafetis barely escaped the floodwaters that came thundering through his Staten Island neighborhood, and it would be days before they subsided enough that he could safely return home.

Rebuilding his home, which has now been raised several feet, included filling the 77-foot long space under his home with three feet deep of stones. View the photo gallery

Jackie Passer, works with ReachGlobal crisis response, a mission arm of the Evangelical Free Church of America. Reach Global was part of the collaborative effort with NYAC/UMCOR and the Episcopal Church in rebuilding the home of George Morafetis on Staten Island.

By Arthur McClanahan and Brooke Pierce*

It’s been three years since Superstorm Sandy wreaked havoc in the coastal areas of New York City, leaving thousands homeless and in desperate circumstances. Most of the disaster relief agencies have come and gone, but the needs are still there. United Methodist Committee on Relief (UMCOR) is one of the few major organizations still on the ground in the city.

Samantha Christian, the disaster recovery specialist on Staten Island, describes a night just this past January when she got a call about a woman who didn’t have any heat in her home:

“It was freezing cold. We went to her house because we thought maybe we could get her some space heaters, and what we found was just horrific. Her roof was caving in. The ceiling was collapsing because of the water damage from the roof. Her entire house was rotten – mold everywhere. You couldn’t breathe. She had no water, no heat, nothing. This is a woman in her 60s, on Social Security, and nothing had happened to her home since Sandy. Almost two and a half years after Sandy, her home had not been touched.”

Sandy’s Aftermath Then and Now

It was just four days after the storm hit in 2012 that Christian arrived with a Southern Baptist group to help out.

“We stayed at Bethel United Methodist Church, and that’s how I got in contact with the Methodists. We worked together. And things were such chaos at that point, and there was no one here from the Methodist church who knew anything about disaster relief who was able to coordinate things, so I came back,” she explains.

“I came back as a volunteer, knowing there were some positions that were going to be coming up, so I was hoping to be in employment,” Christian said. “This is my chosen career field. And, I just had such a heart for the people. I met so many wonderful people.”

It’s been two years since then, and she has watched as the help as dwindled. “Every decision we make, we know someone isn’t going to get help. You put a roof on this house, who’s not going to get a roof? Because there’ll never be enough money for everyone.”

The elderly, in particular, have suffered a great deal of neglect in the wake of Sandy, Christian said.

“We have a lady in her 70s who still doesn’t have plumbing. She goes to the bathroom in her bathtub. She had to tell us just right out, she can urinate in the bathtub and rinse it down with some water. But in order to do the other, she goes to one of the abandoned houses to use the bathroom, because she had an accident while trying to use a bag,” Christian said with disbelief in her voice.

“We’re in America, in New York City, and she’s trying to go to the bathroom in a garbage bag. 77 years old. And because the help just stopped, she ran out of money.”

Supporting Each Other in Tough Times

The small core of dedicated people still aiding in Sandy recovery – ReachGlobal is the other major organization still helping out in Staten Island – try to keep each other’s spirits up. (ReachGlobal is a crisis response ministry of the Evangelical Free Church in America.)

“These days just get so hard. We pray, try to fellowship, but you work such long hours, and sometimes seven days a week. The thing that really keeps me coping . . . is that we never have our worse meltdown on the same day as somebody else,” Christian said with a laugh.

“In our various stages of crisis, chaos, burnout, you name it – not one of us has had our breaking point on the same day.”

That support system is vital when each day means being confronted with heartbreak.

“You hear these stories and you see such utter devastation and lack of hope. I’ve had strangers crying in my arms on the street,” she said.

Amidst the tragedy, there are also inspiring stories of resiliency and selflessness, like that of 71-year old John Stonick.

“He almost died,” Christian said. “He was hospitalized twice. He lost two houses. He lost everything he owned, and he kept turning away help. We were actually the first group that helped him because he kept saying, ‘My neighbors need help more.

“He thought everybody was in more need. And then he just never stopped helping, himself. If people were working in his house, he didn’t work on his house, he went and worked on somebody else’s house. And he did it with such joy. He never saw how devastating his loss was. He just looked at the bright side the entire time.”

The bright side is that, with the help of UMCOR and others, people like Stonick are finally getting assistance, whether it’s new plumbing or a hotel to stay in while their home is being rebuilt. But the progress is slow.

“We are so incredibly desperate for volunteers,” Christian lamented. “Even if it’s for one day, that family that you helped is one more day closer to getting home. We just can’t do it without volunteers, there’s not enough money.”

She emphasized that it doesn’t matter what a person’s skill level is, their help is still needed. “There’s a job for everybody. We’ve had volunteers missing limbs. We had a volunteer who had to be pushed in on a wheelbarrow, and she just sat on a chair and pointed out all the tripping hazards to people. There’s truly something for everybody, and it makes a difference. Most teams that come for one day end up coming back again because they can’t believe how much can be done in a day.”

And when volunteers come out, they aren’t only helping those directly affected by Sandy, they are also helping the helpers.

“It ministers to all of us who are here, who are tired,” Christian said. “We’re tired. It’s been a long road. But we stay because there’s no one else here.

“We are so grateful, I truly love these people. This is my home. It’s been three years, and to see the suffering that we see every day … it shouldn’t be,” Christian said as she wiped away a tear. “I can’t tell you how blessed we are when volunteers come, because it doesn’t just do the work, it gives people hope. It lifts their spirits. They’re just amazed that somebody would take the time to come, to care enough.”

She urges people to pray, talk to friends and family, and plan a trip out to help if you can.

“Be the hands and feet of God. Doesn’t matter what you do, we can use you.” 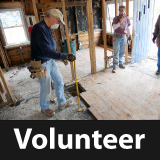 “Returning a Sense of Belonging”

Will you say “yes” to help those longing to return home after three years? Download this compilation video to show at your church or in your community to make people aware of the continuing need to help survivors of Superstorm Sandy rebuild their homes and lives. Click the links below the video to download a copy to your device.

Information for downloading and viewing the, "You can say... Yes!"  video offline for iPad and iPhone