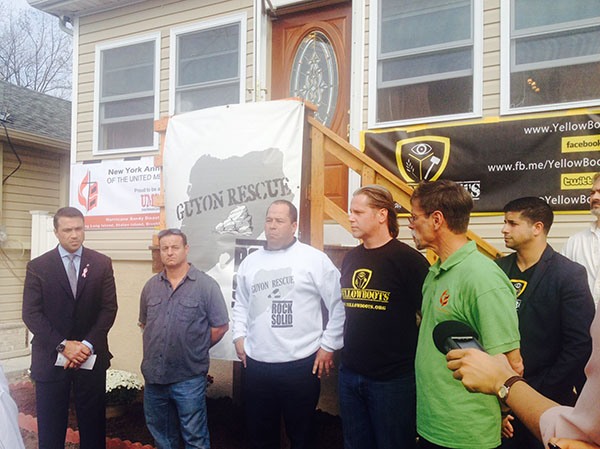 Two years ago, Super Storm Sandy barreled into the east coast on October 29, 2012. Two years ago, the Camuso family’s life changed forever. Christopher Camuso, a single parent living in Staten Island watched as his house was torn apart by the storm. He lost everything, but the structure remained and so did the health of his children. Unsure about his own situation and being a selfless person, he focused his efforts on neighbors who needed help, mucking and gutting. When the time came for him to make decisions, he chose to stay and rebuild. 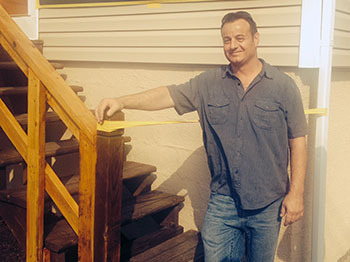 Wednesday, October 29, 2014, exactly two years later, the Camuso family is returning home with the help of Yellow Boots USA, Guyon Rescue, and the New York Annual Conference of The United Methodist Church. These organizations, along with volunteers, celebrated with Christopher as he cut the tape to his rebuilt home.

There are many happy stories that are similar to that of the Camuso family, and all over the region, October 29th marked the second anniversary of Superstorm Sandy, but there are still families whose homes are still in need of repair; families who want to return to their homes.

Led by Tom Vencuss, Coordinator of Disaster Recovery Ministries for the New York Annual Conference, the NYAC is working with over 20 other faith-based and non-profit organizations. Since November 2012, the NYAC has coordinated nearly 40,000 volunteer hours, and through generous grants from UMCOR and the American Red Cross, as well as United Methodist congregations, has assisted 450 families in their recovery. With this support, our Sandy Recovery ministry has funded projects and direct aid to clients in excess of $2.235 million.

There is much more work to be done and we are not done yet!! In NYC alone, there are approximately 26,000 homes registered with government-backed programs. These are homes that need repair in order for families to recover. It is said that each conference is responsible for their own disasters. As United Methodists, we are a connectional denomination that crosses city, county, state and country borders. When one conference is in need, the United Methodists are there to help in any way they can. As Tom Vencuss states, “We often say that while Methodists may not always be the first in, we are among the last to leave. We are in this for the long haul.”

Be the blessing: We need skilled and unskilled volunteers for projects that are coming up and continuing throughout the affected areas. Please go to our website for details nyac.com. You can also follow me on Twitter @gina_nyac for information about how you can help! 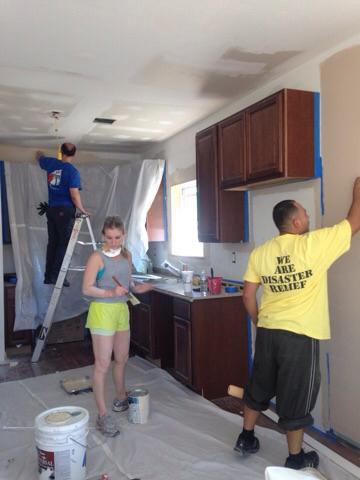 Recovery workers in the Camuso kitchen (photo thanks to Yellow Boots); the "after" shot of the kitchen.