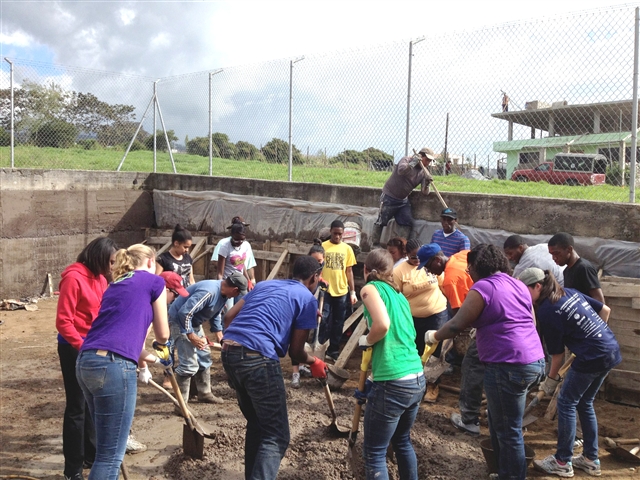 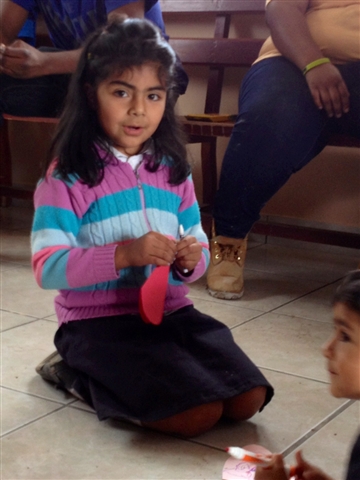 Today was our first day doing vacation bible school with the kids. I was so excited!

Soon a 7 year old girl named Victoria came in and sat next to me with a huge smile and was such a chatterbox. She was one of the kids that we met on Sunday. The theme, (or tema) for Vacation Bible School (VBS) today was love, and Jesus me amo (Jesus loves me). We all colored hearts with what we love on them, and Victoria and I established a really unique and special bond. We would talk to each other in Spanish, and she taught me many new Spanish words, and I taught her some English.

It was amazing that even though I can’t speak Spanish fluently we still got to know each other so well with what I knew and learned from her. I had the best time.

Later on we played “duck, duck, goose” or “plato, plato, ganso” and we all laughed so hard. It was absolutely amazing to feel the joy that these kids bring. I can’t wait for tomorrow!

Today was our first “real” day in Quito, Ecuador and there was no better way to christen the start of our mission trip than attending church. The scenic hour long drive through the rustic Andes Mountains set the tone for what we were about to experience at the Iglesia Evangelica Metodista Unida “El Nazareneo”.

Although the sermon was set in an alternative language, the welcome we received was clearly understood. The joy brought on by the singing of the congregation and the excitement of our approaching mission engulfed our spirits, however the elongated standing wore out my knees. After church, we were greeted by the people of Ascazubi, Bishop Silvio Cevallos and treated to an indigenous meal of the Ecuadorians, “el sopa de pollo”. To my surprise, this chicken soup was nothing similar to a traditional Campbell’s can soup for it also contained the head and the feet of the chicken.

Our day was not merely over because after we arrived back in Quito, our tour of the grand city began. We transitioned from the evolving architecture of “New Quito” to the historic scenery of “Old Quito”. In the midst of it all, we were granted the opportunity to be in the presence of the celebration of President Rafael Correra’s re-election. To ease the commotion of the group, Pastor Oscar continued the tour, where we visited “La Avenida de la siete cruzes” (The Avenue of the Seven Churches). The architecture and ornate detail of the 14th century churches was breathtaking. We also traveled up the mountain and viewed the Statue of the Virgin Mary, which overlooked the city.

As the end of the day approached, we had dinner on a hill where we witnessed the panoramic view of Quito at night. This first dinner meal in Quito also posed significance because it was the last time we could order traditional American food until next Sunday. 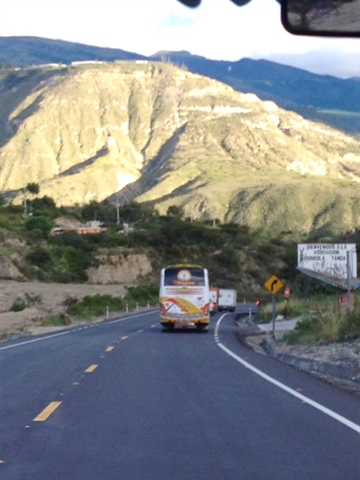 Today we started working when we got to the church.

The courtyard was covered in mounds of dirt. There was a pile of wood, of steel supports and of trash. By the end of the day all three of those piles were cleaned up. The main job was clearing the dirt. People stayed in the courtyard with shovels, putting the dirt into wheelbarrows. At first it was easy because it was all loose dirt piles. Then, it got harder because we had to dig into the actual dirt. We made sure it was nice and level. The wheelbarrows with dirt were taken down the road and used to fill it. After the holes in the road were filled, we put the remaining dirt on the side of the road to prevent erosion. Pastor Jessica and Elizabeth (Bishop Silvio Cevallos’ Secretary) directed that effort. In the courtyard, we worked in groups to make sure everything got done. Some people used pick axes and hammers and picks to flatten out a stone wall. All of the work was really noticeable by the end of the day, which was awesome.

I got a tan today! Unfortunately, I have awkward work glove tan lines now. My face is a little red, but I didn’t burn like most people.

We had lunch at the church today, made by the Bishop’s wife and members of the church. Lunch was beef stew, rice, corn, avocado, fried plaintain and hominy porridge for dessert. I was very grateful. We had both breakfast (French toast) and dinner (chicken, rice, potato and tomato) at the hotel. After dinner we hung out, some people did homework and I wrote postcards to friends and family as well as played chess with Akasha. Overall, today was a great start of work and I hope we get as much done the rest of the week.

Sunday was our first day in Ecuador.  In the morning we went to Iglesia Evangelica Metodista Unida “El Nazareno”, our host church.  We were greeted with choruses of “Buenos dias” and “Bienvenidos” ringing in the air accompanied with a surplus of smiles, handshakes, and hugs.

During the service I was pleasantly surprised at how much of my Spanish from previous years of Spanish classes came back to me.  There were some songs we sang in church that most of us recognized from the English version.  It was interesting to now sing them in Spanish.  Pastor Oscar and Bishop Cevallos kept repeating that although we speak different languages, we still speak the same language, the language of Jesus Christ; the language of love.

Pastor Oscar was preaching that day and told us we have to live each day we have here like it’s our first, last, and only day to be here.  It was a great sermon in that he managed to preach both in Spanish and English.  He also told us that growing up he hated speaking in public but then he realized that God loves him for all of his flaws and found the courage to not just speak in front of others, but to preach as well.  Funny how shortly after his sermon I was singled out to lead a song when I’m definitely not a fan of singing on stage in front of a bunch of people.  God’s just funny that way.

After church we went to a nearby restaurant for lunch. The first thing that appeared was chicken soup and by chicken I mean any part of the chicken.  At the bottom of my bowl was a chicken foot but in others there was an entire rooster head, it goes without saying that most of us only sipped the broth.  Afterwards came some chicken, rice and potato; a dish that we would become very familiar with on this trip.

Later on we got to go sightseeing around Quito.  It’s a beautiful and fascinating city.  We passed right in front of the Presidential Palace as [Rafael] Correa came out to announce his reelection.  We were right in front of the crowd as we witnessed Ecuadorian history.  I think we even managed to get on national television as cameras went over and in the crowd.  We also went to the statue of the Virgin Mary on top of a mountain and finished with dinner at a restaurant with the most beautiful view of Quito.  The first day was a great start to this trip. 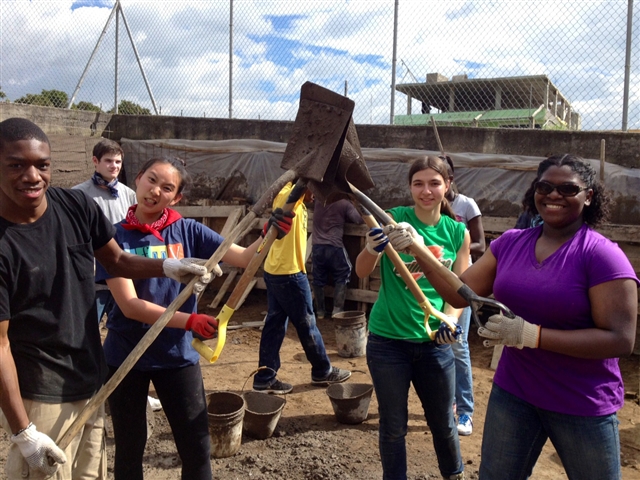