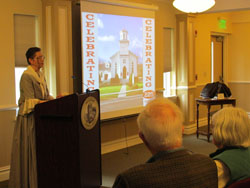 celebrated its 225th anniversary in June 2014! On May 3, 2014 a historical talk about the church was given by Jean McMillan at the Salisbury Public Library in Salisbury CT. For the occasion the saddlebags used by Freeborn Garretson, held in the Christman Archives, were exhibited.

Lakeville, along with Jesse Lee UMC in Easton, CT is one of the two oldest continuous Methodist congregations in New England. Rev. Freeborn Garrettson preached at Lakeville on December 1, 1788. The congregation was organized in 1789, and the current church was built in 1816. 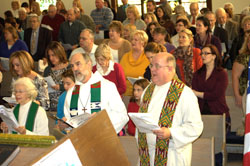 On the 24th Sunday after Pentecost, the congregation of the United Methodist Church of Milton-Marlboro gathered to celebrate 200 years of faith. When Milton and Marboro merged their congregations in 1982, both churches had long and distinguished histories. Both were established in the early days of Methodism in the United States. Milton Methodist Episcopal Church was organized and began construction of a church building in 1812. Methodist classes were held in Marlboro as early as 1818, although the church was not organized and a building occupied until 1830. In 1867, the original Marlboro church was sold and a new church built, which tragically burned to the ground in 1915. The congregation rebuilt in 1918 and occupied that building until the merger in 1982, when it was demolished.

The Milton church boasts the oldest organized Methodist church in Ulster County standing on its original location. The original 1812 church was extensively renovated in 1904 and additional modernizations have been made in the intervening years.

As part of the United Methodist Church of Milton and Marlboro’s celebration of its 200th anniversary on Nov. 11, 2012, Pastor Jody Spiak took a "circuit rider" journey. On horseback, he rode from the site of the former Marlboro Methodist Church (now an empty lot across the street from the Marlboro firehouse) to the Milton Methodist Church building. The ride, which took approximately two hours, was meant to honor the Marlboro church’s past and the Milton Methodist Church, being symbolic of them becoming one congregation. It also paid tribute to the circuit riders, Methodist preachers who traveled long distances on horseback in the late 1700s and early 1800s, spreading the word and organizing Methodist classes. They preached in homes, barns, inns, taverns, clearings, and any other place they could gather a group interested in Methodism.