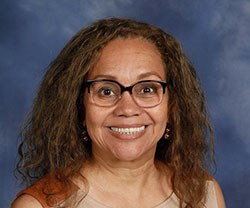 Reverend Lydia E. Lebrón-Rivera began her ministry in the New York Annual Conference in the local church in the 1980s, serving first as a deacon. She was ordained in 1986 as an elder.

An avid reader, she writes poetry and has a passion for community empowerment and organizing. Rev. Lebrón-Rivera is currently completing a four-year term as Chair of the NYAC Board of Ordained Ministry. She is also fluent in English and Spanish.

Within the New York Annual Conference (NYAC), Rev. Lebron-Rivera has served at:

Rev. Lebrón-Rivera also served an appointment to ministry beyond the local church as Associate Director for Hispanic Ministries for the Multiethnic Center for Ministry of the NEJ and later as a scholar for Biblical translation at the American Bible Society (ABS).

For almost two decades Rev. Lebrón-Rivera was an instructor in Garrett-Evangelical Seminary’s Course of Study School and while appointed to pastoral ministry, she continued to teach, lecture, write and lead workshops.

Rev. Lebrón-Rivera’s husband, Daniel Johansson, is an ordained minister in the Evangelical Lutheran Church and they have two gifted young adult children, Ester Amelia and Leonardo.