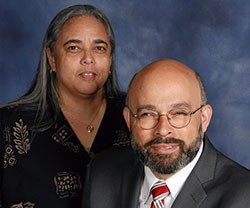 Reverend Hector Rivera, a native New Yorker, was born and raised in the Bronx. The sixth of seven children, he came to Christianity at the age of 15 and served in various ministries within the Pentecostal church prior to being introduced to the United Methodist tradition in 1990.

Rev. Rivera earned a Master of Divinity from Drew University’s Theological School in 2009 and a Doctor of Ministry degree in 2018. His other degrees include a B.A. in Anthropology and Philosophy and an M.A. in Modern European History, both from Herbert H. Lehman College in the Bronx.

In 2012, while at First Spanish UMC in Spanish Harlem, Rev. Rivera was ordained as an Elder in full connection by Bishop Jeremiah Park. Rev. Rivera has also served at St. Stephen Spanish UMC (the Bronx); The Church of the Village (West Village); Broadway Temple UMC (upper Manhattan); and Hauppauge UMC and FUMC in Central Islip, NY (Long Island).

Rev. Rivera and his wife, Yvonne, recently celebrated 40 years of marriage. They are the proud parents of four children and four grandchildren.