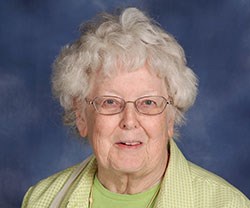 Well before answering her call within the United Methodist Church, Pastor Agnes (Margaret) Campbell Saffoury labored in a variety of roles that placed her in position to share Jesus’ love.

Today, within the New York Annual Conference, Pastor Agnes channels her more than 40 years of experience as an educator and administrator into her call by embracing difference, fostering collaborative engagement and encouraging innovation on all levels.

Her devotion is to working with the senior population and assisting with their ability to face new changes and adapt to end-of-life realities.

Pastor Agnes holds a Bachelor of Arts (BA) from Ladycliff College and earned a Master of Science (MS) from Long Island University. She also attended the New York Theological Seminary.

Pastor Agnes has served in several roles within the local church including:

Pastor Agnes is an active member of several clergy associations—some of which she formed and chaired. Additionally, she has:

In her “spare” time, Pastor Agnes enjoys the arts, travel and continuing education. She and her husband of more than 50 years, George Saffoury, have one child and two college-age grandchildren. Pastor Agnes has basic language proficiency in French, German and Arabic.