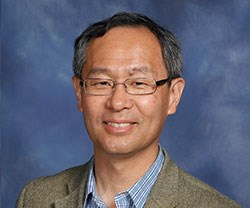 Reverend Charles Young-Chul Ryu is a fourth generation Methodist. Born in Seoul, Korea, his family immigrated to the United States in the middle of his attending high school, which he finished in Glendale, California. Called to ordained ministry rather early during his childhood in Korea, that call deepened itself over time, and was clarified even through and because of the disruptive change in his life settings, now as an immigrant and ethnic minority in the U.S. He began to see his life more as a global citizen, in turn reclaiming Wesley’s “World is My Parish” from his new social location. Over time, his spiritual journey progressed from his more traditional and pietistic background to a more ecumenical, inter-faith, progressive, activist, scientific, and contemplative/mystical form of Christian walk.

A passionate learner, Rev Ryu received philosophical and theological education from Boston University (B.A.), The University of Chicago (M.A) and Yale University (M. Div & STM). He also holds a second B.A degree in music (theory and composition) from State University of New York at New Paltz, and has done a graduate level study at Vatican’s Pontifical Institute of Sacred Music (Rome, Italy). He is a member of two academic guilds: European Society for Intercultural Theology and Inter-religious Studies (ESITIS), and European Society for the Study of Science and Theology (ESSSAT).

During his pastoral journey over three decades, Rev. Ryu has been previously appointed to:

Additionally, he served as part-time or short term assignment pastor while studying and during transitional periods in the following churches: