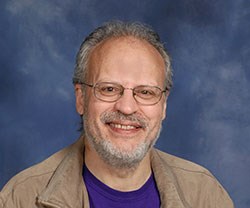 Reverend Matthew C. Schaeffer has served God in many ways. He has been  a counselor, manual laborer, educator, business manager, and a youth minister,
to name just a few ways in which he has lived into his calling. He believes that a vibrant church is one that nurtures its members while serving the community for the glory of God.

Born in Bay Village, Ohio, Rev. Schaeffer moved with his family to Richmond, Virginia when he was eight-years-old. A year later, the family moved to a farmhouse in Center Cross—a place where downtown consisted of a gas station and the general store.

After earning a Bachelor of Arts from the University of Virginia in Charlottesville, Rev. Schaeffer worked in Richmond for the next six years before moving to Seattle. There, he enlisted in the United States Army and deployed to South Korea. He became a language instructor in Seoul after honorably completing his term of service.

While in Seoul he met the love of his life, Hyesun. The couple married in 1993 and soon welcomed a son to the family before moving stateside and eventually settling down in Patchogue, a town on Long Island. It was there that Rev. Schaeffer heard God calling him to ordained ministry. He earned a Master of Arts in Special Education from The City College of New York in 2005 and then entered the New York Theological Seminary and received a Master of Divinity (M. Div.) in 2010.

In 2016, he was appointed to Bethel United Methodist Church on Staten Island.

Reverend Schaeffer  has been on several missions to The Dominican Republic (2007) and Haiti (2015,16 and 17), and has served alongside emergency response teams through United Methodist Committee on Relief (2012 and 2018).

His hobbies include reading, playing guitar, hiking, and watching old movies. He has been married to Hyesun for nearly 30 years and their son, James, is currently in medical school.