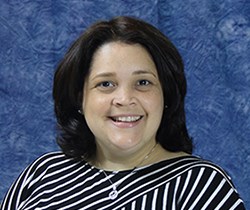 Reverend Karina Feliz was actively involved with children and youth ministry when she first recognized God’s call to ordained ministry in her life. Although Rev. Feliz began her college studies expecting to become a doctor, she soon found that her passion went beyond tending to the physical needs of people. God was calling her to tend to the souls of others.

Rev. Feliz earned a Bachelor of Arts (BA) in Philosophy from Nyack College and a Master of Divinity (MDiv) from  Drew Theological Seminary in 2015. In 2013, during her cross-cultural experience in Busan, Korea at the World Council of Churches, Rev. Feliz became especially concerned with the disparity experience of Latinx in the United States, which encouraged her to focus her ministry on advocacy for Latinx immigration.

Rev. Feliz was ordained in June 2019. Rev. Feliz has overseen a five-point church charge that included:

Rev. Feliz is also strongly passionate about teen suicide prevention. The current reality of losing many children, youth and young adults to suicide is a constant focus in her ministry; she hopes to provide tools for those dealing with suicide ideation.

Rev. Feliz is a published author whose works have appeared in Lecciones Cristianas – Primavera 2020 (Cokesbury) and a number of publications including The Vision and UMC News.

Rev. Feliz and her husband Graig have three children. In her spare time, she loves to read—some of her favorite authors are Henri Nouwen, Gustavo Guittierez and Elsa Tamez and anything about Plato—write reflections and spend time with her family at the beach.

Rev. Feliz is a native of the Dominican Republic and is fluent in English and Spanish.