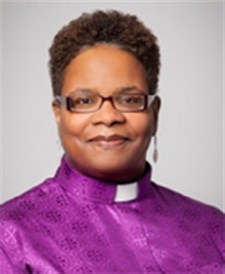 An Indiana native, Easterling worked in the human resources field and as an attorney before being ordained a Deacon in 1995 and an Elder in 1997. She served at Union UMC in Boston’s historic South End, Pearl Street UMC in Brockton, Mass., and Old West Church, UM, in Boston. From 2012 to 2016, she oversaw 57 congregations as superintendent of the Metro Boston Hope District in the New England Conference. In 2016, she was named Dean of the Cabinet in the New England Conference.

During her ministry, Bishop Easterling served as co-chair of the Board of Global Ministries, and as a delegate to the 2012 and 2016 General and Jurisdictional Conferences. She is a published author and frequent teacher and speaker. She is described as an inquisitive, collaborative and transformational leader.

Bishop Easterling is married to the Rev. Marion Easterling Jr., pastor of Wesley Grove UMC in Hanover, MD, and the former pastor of Parkway UMC in Milton, Mass. They have two sons, Garret Walter and Miles Teronza.