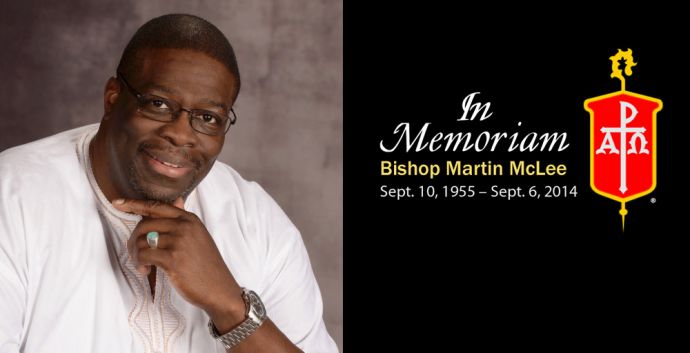 Photo courtesy of the Council of Bishops; Collage by UM Communications

Martin D. McLee was the resident bishop of the New York Area within the Northeastern Jurisdiction of The United Methodist Church. He was consecrated as a bishop on July 19, 2012 and provided leadership to approximately 462 churches in New York and Connecticut when he died on September 6, 2014. Prior to his election to the episcopacy, Bishop McLee served as the superintendent of the Metro Boston Hope District of the New England Conference of The United Methodist Church.

A native of Brooklyn, New York, the faith journey of Bishop McLee was nurtured as a youth at Cuyler-Warren UMC. He was also a son of the St. Luke “Community” UMC in Dallas, Texas, where he responded to the call to ministry under the leadership of the Reverend Dr. Zan Wesley Holmes Jr.

The recipient of the prestigious Ziegler Award for Preaching Excellence, he was the former senior pastor of the Union UMC, a reconciling and inclusive congregation in Boston’s South End.

While in New England, he served as adjunct professor of social work at Simmons College and at Brandeis University. He was committed to activism and frequently lectured on issues concerning HIV/AIDS and the faith community, race relations and social justice. He served as an associate pastor at the Hamilton Park UMC in Dallas, Texas and an assistant pastor at St. Luke “Community” UMC in Dallas. At Southern Methodist University he served as a research associate and as a chaplain’s assistant. The bishop also served as a Juvenile Justice Advocate and public school educator prior to entering the ministry.

Prior to his death, Bishop McLee served as president of the Northeastern Jurisdiction’s Multi-Ethnic Center. Additionally, he served as the vice president of Strengthening the Black Church for the Twenty-First Century Initiative, and on the boards of Drew University, New York Theological Seminary, and the New York Methodist Hospital.

Bishop McLee was known as a bridge-builder committed to bringing people into relationship with Christ through both evangelism and social justice ministries. He was a servant leader at heart.

The words of Philippians 4:4, “Rejoice in the Lord always; again I will say, Rejoice.” was one of the guiding scriptures of Bishop Martin D. McLee’s faith journey.

We are all thankful for the ministry of Bishop McLee. He will be missed by an immeasurable number of people — family members, dear friends, co-laborers in Christ — who were touched by this awesome man of God.