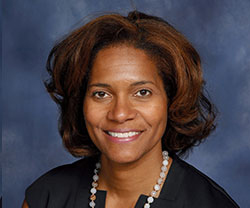 Reverend Dr. Denise Smartt Sears is a native of Brooklyn, New York. She currently serves as district superintendent of the Metropolitan District of the New York Annual Conference. Rev. Sears was the first pastor of the New Rochelle United Methodist Church formed under her leadership. Previously, Rev. Sears served as the pastor of St. Luke’s UMC for eight years and Christ UMC for one year. Sears seeks to unite individuals from various socio economic and cultural backgrounds while strengthening the youth and small group ministries.  She is passionate about living out the challenge of being a church of “Open Hearts, Open Minds and Open Doors.” By the grace of God she is equipped to…run with perseverance the race that is set before us, looking to Jesus the pioneer and perfecter of our faith.

Active in the community, she is a member of the Coalition of Mutual Respect; Citizens for A Better New Rochelle; Delta Sigma Theta Sorority, Inc. Westchester Alumnae Chapter, Jack and Jill of America, Inc. Westchester Chapter, and is a chaplain for the New Rochelle Police Department. Rev. Sears is married to Mr. Wendell T. Sears and they are the proud parents of two sons, Daniel and William.

Manhattan: Church of the Village