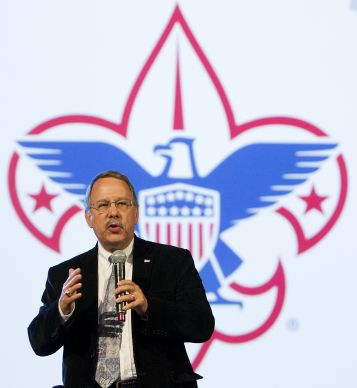 Leaders of both United Methodist Men and the national association said that the dispute has absolutely nothing to do with the controversial decision made last year by the National Council of the Boy Scouts of America to lift a ban on gay members.

At heart, leaders say, the dispute is about the role of an affiliate of an agency in The United Methodist Church.

“Are they a subordinate group that is meant to provide assistance and manpower for what the board is doing?” said Gil Hanke, the top executive of the Commission of United Methodist Men. “Or are they to have a relationship that is different, which is controlling part of the ministry of one of the boards and agencies?”

Phil Craig, president of the national association, said members of his group feel that the commission “wants to dictate everything we do, and we think that’s wrong.”

Craig is a lifelong United Methodist, an Eagle Scout and former Scoutmaster. He continues serve on the board of the National Order of the Arrow, the Boy Scouts’ honor society.

Both Craig and Hanke agreed they expect the change to have little impact on the youth-service organizations supported by local United Methodist churches. But they also agreed the break is regrettable.

The Tennessee-based association long has raised funds for and distributed Scriptures that include Psalms, Proverbs and the New Testament Boy Scout High Adventure programs such as Philmont Scout Ranch and Florida Sea Base and other scouting camps. The group also has helped promote Scouting Ministries Sunday and the denomination’s Programs of Religious Activities with Youth (P.R.A.Y.) award program, which honors participants in church school, youth ministry and scouting ministries.

The national association is about 30 years old and has about 2,800 members in its database, said Craig, although he added that the database needs updating.

The group predates the founding of the Commission on United Methodist Men — which General Conference, the denomination’s top lawmaking body, established as a general church agency in 1996.

The United Methodist Book of Discipline, which contains the church’s policies and procedures, charges the Commission on United Methodist Men with providing resources and support to scouting ministries. The book lists Boy Scouts of America, Girl Scouts of the USA, Big Brothers Big Sisters Amachi Partnership, Camp Fire and 4-H among the civic youth-serving organizations the denomination supports.

The book says "Civic youth-serving agencies and scouting ministries offer another setting for ministry to children, youth, their leaders and their families."

Both the association and commission have worked to support those ministries, but Hanke and Craig agree that tensions between the two groups go back to almost the beginning of the commission and have lasted through multiple changes in leadership.

Matters came to a head not long after Craig was elected the group’s president in July last year.

The commission asked Craig to attend its September board meeting, where the board presented him with eight tasks for the association’s board to complete to maintain its affiliation with United Methodist Men.

“It was the hope that the actions we requested would align the two organizations,” Hanke said. “It was the expectation of the board at the end of the meeting those actions would be completed by Dec. 15.”

That did not happen

The actions United Methodist Men wanted related to business practices and coordination, Hanke said. Craig said the tasks included getting the group’s paperwork in order with the Internal Revenue Service, going through board training and centering its fundraising out of the commission’s office in Nashville.

Craig said his group’s bylaws require that its board members have representation on the commission too, but that didn’t happen when new commission members were elected in 2012.

The commission was one of eight general agencies with legislation approved at the 2012 General Conference to reduce its board size. The result was that for the first time, association members were guaranteed a place on the commission’s board, Craig said.

Craig said his board thinks the commission violated due process in making its demands. Hanke said the commission gave the association every chance to bring its work into alignment.

But Craig also stressed that he hopes the situation can “be resolved without any problems in the church.”

“I don’t want people taking sides,” he said. “They have their ministry, and we have ours.”