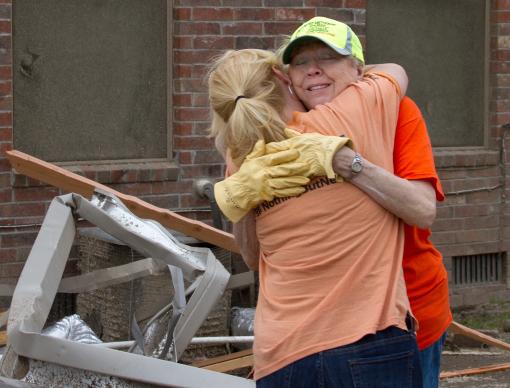 Ida Rose (right) receives a hug from Sheri Mathews, Spiritual and Emotional Care Team supervisor for the Arkansas Conference Disaster Response Team. Rose is an early response team member, but on April 28 she was at the severely damaged home of her son and his family, who live in the River Plantation neighborhood in Maumelle, Ark.

Deadly tornadoes that swept through the upper South and Midwest April 27 had United Methodists, among others, assessing damage and preparing to offer relief.

By the next day, at least 16 deaths in Arkansas alone had been blamed on a fierce tornado that cut through 80 miles of suburban Little Rock, Ark., with the towns of Vilonia and Mayflower particularly hard hit.

Rescue workers were still searching for survivors in Vilonia, where many homes and buildings were destroyed, including a $14 million public school set to open this fall.

The nearby town of Mayflower also got clobbered, but Mayflower United Methodist Church largely escaped.

“We’ve got some shingles missing off the roof, but the building is intact,” said the Rev. Rick Wilkins, pastor. “We had a large tree come down on a metal storage building, but that’s inconsequential.”

Wilkins said some church members had their businesses destroyed, and others had their homes damaged. He’s aware of no fatalities or injuries among the congregation, but stressed that he doesn’t yet have a complete picture.

“I’ve called everybody I can get a hold of,” he said. “Some went straight to answering machines, and with some of them, the microwave cell phone towers have been knocked down.”

Wilkins said his church would be ready to offer food, blankets and anything else to those displaced by the storms. “We just need to determine what the need is,” he added.

Maumelle (Ark.) United Methodist Church is in another suburban community of Little Rock where tornadoes touched down. The church escaped damage, but at least three church members had damage to their homes, said the Rev. Zeke Allen, associate pastor.

Bishop Gary Mueller of the Arkansas Conference offered encouragement. "Lives will be rebuilt," he said in a statement posted to the conference website. "Hope will return. And joy will be experienced again. All because the love of God has a way of bringing the best out of people in the worst of situations."

The Oklahoma Conference reported storm-related shingle damage to Quapaw United Methodist Church, in northeast Oklahoma, near the borders of Kansas and Missouri. The town of Quapaw had two storm-related deaths and about a dozen homes were destroyed.

Sixty to 70 homes there were badly damaged, and at least three of those belong to members of First Church. The conference’s disaster response team plans to travel to the area Tuesday.

The United Methodist Committee on Relief said it will be at work in the area, and donations can be made to U.S. Domestic Disaster Response, Advance #901670.

Greg Forrester, UMCOR executive for U.S. disaster response, asked for continued prayers for survivors and the work of first-responders as well as for the safety of those in the path of new storms expected across the middle part of the United States.