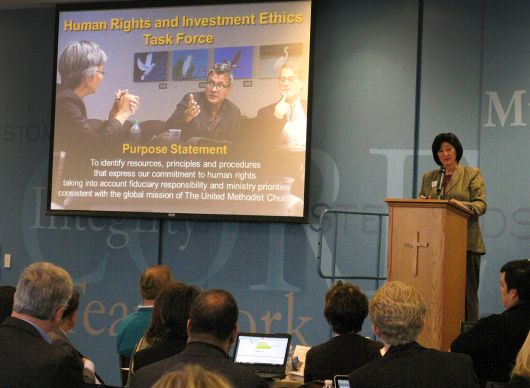 Barbara Boigegrain, top executive of the United Methodist Board of Pension and Health Benefits, discusses the work of the Human Rights and Investment Ethics Task Force. She was speaking Monday, April 28, at the recent Connectional Table meeting, which gathered at her agency's building in Glenview, Ill

A draft report on socially responsible investment, particularly related to international human rights, will be released for comment May 1 to The United Methodist Church.

The report of the Human Rights and Investment Ethics Task Force comes from the United Methodist Board of Pension and Health Benefits and Board of Global Ministries, whose directors approved the preliminary document.

Comments, which can be sent by email to HRIEreport@gbophb.org, will be accepted through June 1 and the final report will be presented for approval to the two agency boards in the fall.

“We believe it is vitally important to find congruency between meeting the needs of our constituents and responding to the call to be faithful Christians,” wrote Barbara Boigegrain and Thomas Kemper, top executives, respectively, of the pension agency and Global Ministries, in a letter introducing the report.

The draft report’s preamble elaborates on that point, saying, “The human rights-related resolutions that fill our Book of Discipline reflect a profound theological commitment to share God’s grace in the world by protecting and enhancing the well-being of all persons.”

Boigegrain called the draft report  — presented to the denomination’s Connectional Table earlier this week — an effort to “further delineate” The United Methodist Church’s Social Principles and guidelines currently in place for the denomination regarding human rights and investment ethics.

After the 2012 United Methodist General Conference, the denomination’s top legislative body, passed a resolution on “Aligning UMC Investments with Resolutions on Israel/Palestine,” a delegation from Pension and Health Benefits and Global Ministries traveled to the region to better understand the dynamics and consider peacemaking strategies.

The trip suggested a need for a more comprehensive way of assessing human rights issues. “We both agree that beyond Palestine/Israel we needed to develop a system for addressing human rights and ethical concerns as we consider resource investment while conducting our mission,” Boigegrain and Kemper wrote.

“The task force was an outgrowth of that (trip), intended to continue this important conversation,” Boigegrain added in an interview.

As described in the report, the task force’s purpose is “to identify resources, principles, and procedures that express our commitment to human rights, taking into account fiduciary responsibility and ministry priorities, consistent with the global mission and ethical standards of The United Methodist Church.”

An emphasis on fostering both internal coherence and external coherence was helpful, Boigegrain explained, as a way of thinking about investment ethics and human rights “within the framework of each of our own missions.”

Having an ongoing conversation about human rights and investing among the agencies will provide a better overall outcome, she said, allowing them to identify areas of mutual collaboration and to keep each other informed.

“To my mind, the most important accomplishment of the task force is in finding common ground and trust around the important issue of keeping mission and financial investment in conversation going forward,” Kemper told United Methodist News Service.

“What we do as a church in mission cannot be separated from how we invest our resources.  We have reached points of agreement, consensus, on how we will go about dealing with specific situations that arise in the complicated matrix of international investments and its moral implications.”

Listening “to the voices from communities that are affected by investments and divestments” is one of the missional aspects of the discussion, Kemper said.

As an example, he cited mining companies in the Democratic Republic of Congo that can affect communities by bringing in outside workers and having a negative environmental impact but also provide educational opportunities and other benefits. “We need to hear from all the voices of our church when we make decisions,” he added.

Boigegrain said the task force had a unique mix of representation, including theologians, academicians, top denominational agency executives, United Methodist business leaders and a representative of the Carter Center in Atlanta.

*Bloom is a United Methodist News Service multimedia reporter based in New York. Follow her at http://twitter.com/umcscribe.or contact her at (646) 369-3759 or newsdesk@umcom.org.