Complaint ends against elder accused of being ‘practicing’ lesbian

Complaint ends against elder accused of being ‘practicing’ lesbian 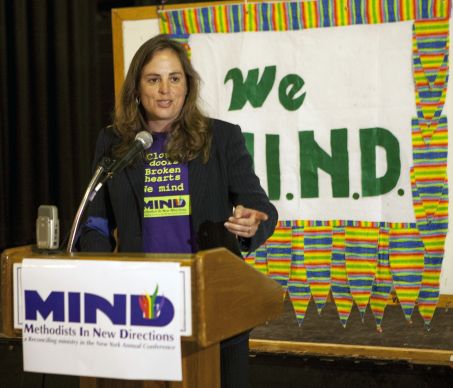 The Rev. Sara Thompson Tweedy speaks at a Methodist In New Directions event in 2013. MIND is an unofficial group in the New York Annual (regional) Conference that advocates for greater inclusion of gay, lesbian, bisexual and transgender individuals.

The Rev. Sara Thompson Tweedy, a New York Annual (regional) Conference elder, no longer faces a complaint accusing her of being a “self-avowed practicing” lesbian. The New York Conference confirmed Tweedy’s announcement that the case has been dismissed.

This marks the second time this year that New York Conference leaders have resolved a case without a trial against clergy members facing complaint under the denomination’s stance on homosexuality.

In March 2103, an official complaint was filed against Tweedy accusing her of being a “self-avowed practicing homosexual,” a chargeable offense under the denomination’s Book of Discipline. Last October, Bishop Martin McLee referred the case to a counsel for the church, roughly the equivalent of a prosecutor, for investigation. Last week, Tweedy received a letter from McLee telling her the complaint has been dismissed.

“I’m grateful that he did the right thing here and dismissed this case,” Tweedy told United Methodist News Service on Monday, May 5. “I think it ended the way it should have, given our current Book of Discipline. This is as much as we can ask of our bishops.”

She added that her case’s resolution shows “that the New York Annual Conference is very committed to being a place where GLBTIQ people can live and serve, and I am very proud to be part of the conference today.” The initials stand for gay, lesbian, bisexual, transgender, intersex and questioning.

The identity of the person who filed the complaint is confidential. Leaders of the Wesley Fellowship — an unofficial caucus of evangelical and orthodox pastors and laity in the conference — earlier said they did not file the complaint. Wesley Fellowship leaders did not immediately return requests for comment on the dismissal.

Tweedy, 39, started as a local pastor in 2001 and was ordained an elder in 2006. She previously has worked full-time in parish ministry and now serves in extension ministry as the dean of student development services in the State University of New York Sullivan, a community college. She also serves as sanctuary pastor at Memorial United Methodist Church in White Plains, N.Y., where she preaches monthly.

She is on the steering team of Methodists in New Directions, an unofficial caucus that advocates for greater inclusion of lesbian, gay, bisexual and transgender people in the New York Conference. On the caucus website, Tweedy’s biography notes that she “shares life with her spouse, Kristin Marcell” and their two sons.

Tweedy does not deny that she is a lesbian. However, she takes issue with the term “self-avowed practicing.”

“What’s the equivalent in the heterosexual world?” she said. “‘Self-avowed practicing’ perpetuates the injustice committed against queer people, which is that we have been reduced to our sexual acts. …There is so much more to marriage than that and so much more to being a human being.”

The Book of Discipline, the denomination’s law book, since 1972 has asserted all people are of sacred worth but the church considers the practice of homosexuality “incompatible with Christian teaching.”

Church law bans “self-avowed practicing homosexuals” from “being certified as candidates, ordained as ministers, or appointed to serve in The United Methodist Church.”

The Book of Discipline further defines marriage as a covenant “that is expressed in love, mutual support, personal commitment, and shared fidelity between a man and a woman.” It bars clergy from officiating and churches from hosting same-sex unions.

Church law also calls for seeking a “just resolution” when complaints occur. The Book of Discipline says “church trials are to be regarded as an expedient of last resort.”

However, a majority of voters in the New York Conference repeatedly have approved petitions seeking to change church law on homosexuality, most recently in 2011. In 2013, the conference approved a resolution by Methodists in New Directions that commended United Methodist individuals and congregations “whose bold actions and courageous statements help to provide for the pastoral needs of same-sex couples within The United Methodist Church.”

The dismissal of Tweedy’s case comes less than two months after McLee announced the resolution of the complaint against a retired United Methodist seminary dean, the Rev. Thomas Ogletree, 80. Ogletree officiated at the wedding of his son, Thomas Rimbey Ogletree, to Nicholas Haddad on Oct. 20, 2012.

At the same March 10 press conference, McLee called for “the cessation of church trials” against United Methodist pastors who perform same-sex wedding ceremonies. McLee, however, did not speak to the circumstances of Tweedy’s case.

Meanwhile, the complaint process is still ongoing against clergy across the United States for officiating at same-sex unions. They include the Rev. Stephen Heiss,  a pastor in the Upper New York Conference; the Rev. William McElvaney, a retired United Methodist pastor and former seminary president in the North Texas Conference; and retired Bishop Melvin G. Talbert.