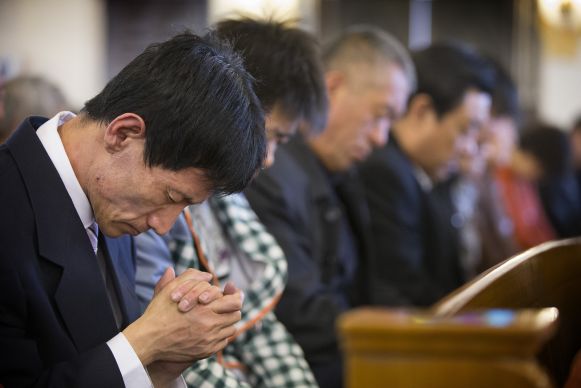 Parishioners pray during worship at Chongwenmen Church in Beijing. The United Methodist Board of Global Ministries has named a new China Program associate, Liu Ruhong, who will work with the denomination’s partners in China and the region.

For several decades, Liu Ruhong supervised United Methodists who came to China to teach English or work as short-term volunteers through the nonprofit Amity Foundation.

Now, she is working for the church itself.

In March, Liu joined the staff of the United Methodist Board of Global Ministries as its new China Program associate — the first Chinese citizen to hold that position and the first to be based in China. From Nanjing, she will assist the board’s Asia Pacific office in its work with mission partners in mainland China, Taiwan and Hong Kong.

George Howard, who leads the board’s mission and evangelism area, expects that Liu’s familiarity with its two biggest mission partners in China — the Amity Foundation and China Christian Council — will provide more mutual opportunities for service.

“It’s our hope she’s able to help figure out the ways we can support the work those two organizations currently are doing,” he said. “To be constantly present and in conversation with people, I’m hoping (she) will be able to open up some doors for them to see how we can collaborate together.”

Rebecca Asedillo, a board staff executive who relates to those partners, considers Liu to be a capable, credible professional with extensive experience working with an international, faith-based nongovernmental organization. “She is sensitive to the dynamics operating in church circles, both in China and the U.S.,” she said.

Liu, 54, did not attend church as a child, but as she told United Methodist News Service while in New York for her April 19-May 8 orientation, “Christianity wasn’t 100 percent new to me.”

THE CHURCH IN CHINA

As one of five officially-recognized religions in China — the others being Catholicism, Buddhism, Islam and Taoism — the number of Protestants has continued to grow since church buildings were reopened in the decade after the Cultural Revolution. UMNS accompanied a United Methodist delegation of bishops and mission staff to China in April 2013. Read more about Christianity there in our series:

Her grandmother, she explained, was raised in an orphanage run by an American missionary. Her grandfather graduated from a church-run university in Beijing and attended worship before the Cultural Revolution. He was a coach and interpreter for visiting U.S. basketball teams.

A 1982 graduate of Suzhou University with a bachelor’s degree in English literature, Liu furthered her studies after joining Amity through a World Council of Churches scholarship. From 1997 to ’98, she took an English language course at Selly Oak Colleges, University of Birmingham in England, resulting in certification for teaching English as a foreign language.

Her time there also exposed her to the cultures of fellow students from Europe and Africa. “It really just broadened your horizons as far as the rest of the world, which is necessary these days as a global villager,” she said.

That exposure also helped as Liu worked at the Amity Foundation with church representatives coming to China from the U.S., Canada, Norway, Demark, Sweden, Japan and the United Kingdom.

“I pushed very hard,” she said, to get religious groups to send people to China to get first-hand information on what China is like today. “The longer you stay, the more you know.”

That type of experience is important, said Howard, who will be traveling to China in July to meet with Liu and United Methodist partners.

He cited her “passion for helping people” and her ability to empower them. “I never saw English language teaching necessarily as a justice issue, but she does,” he explained. “Learning English … is a way of helping them (students) connect and expand their own capabilities.”

During her 28 years as head of the education division of Amity Foundation, Liu supervised members of the Amity Teachers Program, an Advance Special of The United Methodist Church.

One of those teachers is Cornelia “Connie” Wieck, a Board of Global Ministries employee who in recent years has taught English at Luzhou Vocational and Technical College. It is a three-year school in Luzhou, a city of 3.5 million near the Yangtze River in Sichuan Province. She will return there in August after pursuing further Chinese language study this year.

During a May presentation at the board’s New York headquarters, Wieck, who blogs atconnieinchina.org, made it clear that she is dedicated to her students, including 350 in a conversation class, who are preparing to be English teachers at the elementary and junior high level. She shares information on Christianity through classes on culture, with the approval of her dean, and uses activities such as the annual Christmas open house in her “overly decorated” home to help reinforce English instruction.

Wieck invites those who are interested to services at the Luzhou Protestant Church, which was started by Canadian Methodist missionaries in 1913. About 400 attend each Sunday and the church’s ministries to the community include a clinic known as the “Gospel Hospital of Luzhou,” a kindergarten and a pharmacy.

She called Liu both a boss and a friend, “an amazing woman” adept at organization and problem-solving and viewed with authority by Chinese who interact with the teachers program. “We all respect her greatly,” Wieck said.

The practical and the personal

Although her supervision of the Amity teachers was at the administrative level — coordinating placements with Chinese partners schools, making practical arrangements, planning orientation and overseeing monitoring and evaluation — Lui also got to know the teachers on a personal level. “A lot of the work relationships turned into friendships,” she said.

Another of those friends was Bethany Keith, a volunteer sent by the Board of Global Ministries in 2012 to teach in at Jining Teachers College in Inner Mongolia. She met Keith at orientation, and has visited her twice at her placement site, once traveling with Asedillo, who remembers the trip well.

Asedillo flew from Beijing to Hohhot, the capital of Inner Mongolia, where Liu met her and together they waited for the train to take them to Jining. The station was packed with travelers, all of whom were determined to board the train at the same time, and Asedillo was impressed by her companion’s resourcefulness and protectiveness in getting them settled comfortably.

“What I like about her is she is a strong woman,” Asedillo said. “She was undeterred.”