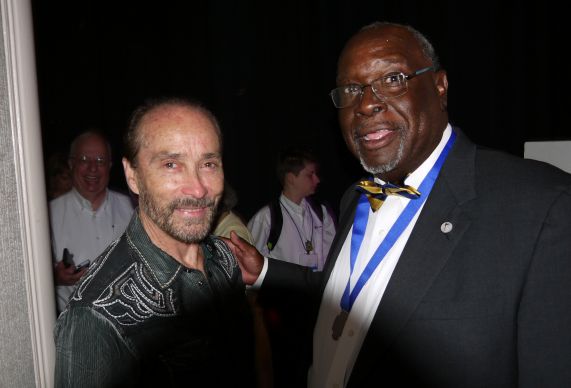 Singer Lee Greenwood stands with Bishop James Swanson Sr. at the Duty to God breakfast held May 22, 2014 in Nashville, Tenn. Swanson was the keynote speaker at the Boy Scout of America annual event attended by more than 1,500 at the Gaylord Opryland Resort.

“’Cause there ain’t no doubt I love this land, God bless the USA.”

Country music star Lee Greenwood brought more than 1,500 Boy Scouts of America leaders to their feet early May 22 with a stirring chorus of his most famous hit. But he wasn’t the only one at center stage.

Swanson leads the Mississippi Annual (regional) Conference and serves as president of theCommission on United Methodist Men, which oversees the denomination’s scouting ministries.

He was the chosen keynote speaker at the Boy Scouts’ Duty to God prayer breakfast, organized by an interfaith group of Scout leaders.

Swanson called on the crowd that filled the biggest ballroom of the Gaylord Opryland Resort to be loyal to God and to the people God has called them to serve.

“I know it is tough in this day in which we live in to be loyal. All around us, people are asking us to be selfish,” the bishop said. “But in Scouting we are asking you to not put yourselves first but to put the causes which we espouse first, which means there must be some sacrifice.”

As an example of that kind of loyalty, Swanson pointed to Josiah, a biblical king who took the throne at the age of 8 — when many boys today are Cub Scouts. Swanson described Josiah as an ideal Scout, faithful and reliable.

“Be loyal in such a way that the world will look upon you in such a way and say as we said of Josiah,” Swanson said, “and that is, that you turn not aside to the right hand or the left but you do what is pleasing in the sight of the Lord.”

When guests arrived at their seats, they found at their place settings “Strength for Service to God and Community,” a daily devotional book published by United Methodist Men.

As the breakfast drew to a close, they heard a benediction from Joshua Steig McDonald, an Eagle Scout in a troop chartered by McKendree United Methodist Church in Nashville. McDonald will graduate with honors from high school May 24, and looks forward to attending the University of Chicago in the fall.

Scouting has been big part of McDonald’s development as a Christian, he told United Methodist News Service. And he plans to take its lessons in teamwork and leadership into adulthood.

“I’ll probably end up being a Scout dad and helping out in any way I can,” McDonald said.

The United Methodist Church long has had strong ties to the Scouting movement, which was founded in 1907 by British baron and military veteran Robert Baden-Powell.

The denomination is second only to the Church of Jesus Christ of Latter-day Saints in the number of congregations that host Boy Scouts of America groups. The United Methodist Church hosts more Cub Scout packs than any other religious group.

As a youngster, Swanson was only able to be a Cub Scout for one year before his family had to move far away from the pack.

“But that one year made all the difference,” he told United Methodist News Service. “I had no father, but a man in the neighborhood got me to join and served as a role model to the other boys and me.”

The experience, he said, helped him become the leader he is today.