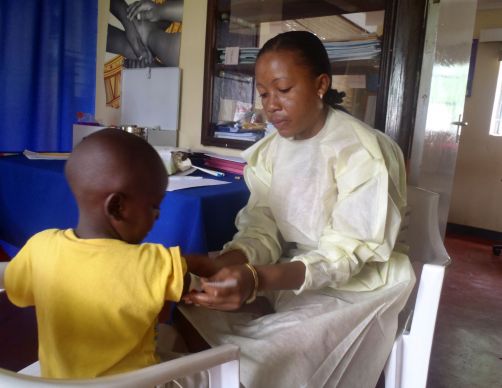 Mercy Nyirongo treats a child in a clinic in her home country of Malawi. A 2010 graduate of Africa University with a bachelor's degree in nursing, Nyirongo is project manager for the ZOE orphan-empowerment program of The United Methodist Church in Malawi.

Mercy Chikhosi Nyirongo remembers her early struggles – her parents divorced when she was 5, minimal education and a teenage marriage with children at a young age. However, she prefers now to think about her goals: to lead public health programs in Malawi and, perhaps, one day, become her country’s health minister.

The little girl from a poor family, befriended by a neighbor who worked as a nurse, knew as a child what she wanted to do. With perseverance and a scholarship to Africa University in Mutare, Zimbabwe, her dreams are coming true.

“I could see her every morning going to the hospital, and then sometimes she would take me into the hospital. That passion grew up in me,” Nyirongo said. “When I got married, I thought maybe that dream was gone. I will not make it. But after giving birth to the three children, I said, no, I think I should go back to school.”

First, she finished her basic nursing and midwifery training and worked in Malawi’s largest public hospital for three years. Then in 2008, supported by a scholarship from The United Methodist Church, she began working toward a Bachelor of Science degree in nursing at Africa University in Zimbabwe. Her objective was to become a leader so she could help change how the health system treated the poor.

After graduating from Africa University in 2010, Nyirongo returned to Malawi, working first as nurse researcher on the H1N1 influenza virus. In 2011, she became the first health coordinator for the Malawi United Methodist Church, where she created community-based health-care strategies that focused on nutrition, water and sanitation, malaria control and early childhood development. The strategies targeted malnourished children under age 5, people living with HIV/AIDS and pregnant women.

For the past year, Nyirongo has served as project manager for the Malawi church’s ZOE orphan-empowerment program, which helps orphans and vulnerable children. The group-based program provides the skills and resources children need to overcome poverty. About 1,500 orphans — ages 15-20, formerly street kids, prostitutes and school dropouts — are grouped into households. They live together and receive training in agriculture, health and hygiene, and vocational skills, such as carpentry, tailoring, bricklaying and small business.

“Some of them want to go back to school, so we provide them with school materials and uniforms,” Nyirongo said. “Also we teach them about God and prayer.”

When she graduated from Africa University, Nyirongo never doubted she would return to Malawi to work.

“I love my country. I love my nation. I wanted to go back and make a difference,” she said. “It's my vision to be the minister of health one day in Malawi.

Now at age 41, Nyirongo is balancing a professional career with her personal life, which includes her husband and three children, ages 20, 16 and 12. She has completed online course work for her master’s degree in public health from Walden University in the United States. Nyirongo will graduate this summer.

“When all is said and done … when I'm gone, I want the community or the people to remember me as someone who influenced change – someone who wanted to see positive change, like behavior change, in people, for the better,” she said.

*Gillem is a freelance writer based in Nashville, Tenn.