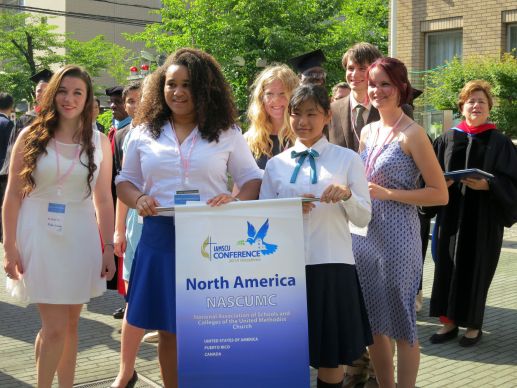 During the opening convocation for the International Association of Methodist Schools, Colleges and Universities, students from North America and Japan prepare for the processional. The association’s 2014 conference is being held in Hiroshima, Japan.

Against a backdrop of gleaming, 21st century buildings and bustling commerce, Methodist scholars are recalling the world’s first atomic bomb, which decimated Hiroshima on Aug. 6, 1945, and sharing ways to prevent such tragedies in the future.

Gathering here for the triennial conference of the International Association of Methodist Schools, Colleges and Universities, academic leaders and students are exploring “Peace, Reconciliation and Human Rights.” Hosting the May 24-28 conference is Hiroshima Jogakuin University, a Methodist-related women’s college founded in 1886.

On May 24, more than 250 registrants — including 70 students — from 40 countries attended pre-conference seminars on theology and peace, human rights, ethics/social responsibility and campus ministry.

The enormous human cost of World War II provided the historical backdrop. Following the Japanese bombing of Pearl Harbor in 1941, Japan and the United States were locked for nearly four years in military conflict, which ended when the United States decided to drop atomic bombs on Hiroshima and Nagasaki rather than invade the Japanese mainland.

“We as people of faith do not want to see the destruction of God’s creation,” said Mark Harrison, who directs the peace with justice program for the United Methodist Board of Church and Society.

“We Christians have the burden of showing others the path of salvation,” added Neerja Masih of Isabella Thoburn College in India. “It is our duty to sow the seed of gospel, spread the word of God.”

“The church’s mission of justice and reconciliation finds its roots in the Holy Scriptures,” said the Rev. Isaac Kaberia Kubai of Kenya Methodist University. “The role of the church can be understood as a place where the love of God is experienced by humankind. The church is a vital part of God’s plan to reach the world.”

After Sunday morning worship at area churches, participants attended the opening convocation at Hiroshima Jogakuin High School, an institution with deep roots in Hiroshima and international peace education. Scholars from Methodist colleges and universities worldwide created a colorful motif as they processed in full academic regalia.

The Rev. Akiko Minato, president of Hiroshima Jogakuin University, recalled her childhood during World War II. “We should not forget what happened here,” she said, noting that devoting her life to peacemaking has been her mission. Quoting Galatians 3:28, Minato reminded participants that “you are all one in Christ Jesus.”

Ted Brown, president of the association and of Martin Methodist College in Pulaski, Tenn., said: “It is most fitting for our seventh IAMSCU conference to be held in Japan, a country with 18 Methodist-related educational institutions and a history of reflection on the meaning of peace, reconciliation and human rights.

“There is no cause more essential to the mission of the Methodist church than education.”

In her keynote speech, Chancellor Ruth M. Grubel of Kwansei Gakuin University in Kobe, Japan, reflected on her early years as a daughter of missionaries. Following her parents’ example, Grubel has served as a missionary with the United Methodist Board of Global Ministries since 1996.

She admitted her family was a bit nervous about coming to Japan, where nearly 70 years ago, the United States unleashed an atomic bomb over Hiroshima. However, Grubel recalled, “People greeted us warmly. We saw signs all over the city saying, ‘May peace prevail on earth.’ It was as if the war had never happened.”

In 1995, an earthquake in the Kobe region killed more than 5,000 people, and a 2011 Fukushima Daiichi nuclear plant meltdown destroyed both infrastructure and lives. Alcoholism and suicide are growing concerns as survivors cope with lost memories, lost opportunities and lost family and friends. “The environment appears normal; yet, so many people are in so much pain,” she said.

She encouraged participants to “look below the surface” and try to reach people who are in distress. One way is through education, the Wesleyan way of “growing God-given potential.”

In Methodist schools, Grubel said, “we have created lifelong friendships with people who once felt they were forgotten.”

As the five-day event continues, participants will hear scholars from Africa, Asia and the Pacific, Europe, Latin America and North America and testimony from A-bomb survivor Koko Kondo; visit the Hiroshima Peace Memorial Museum and Peace Park; and see the presentation of the Ken Yamada Leadership Award.