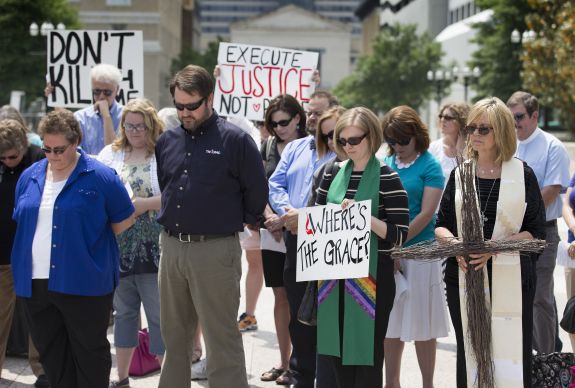 United Methodists and other Christians pray at the Tennessee State Capitol in Nashville during a rally to ask leaders to reconsider a new law allowing the state to execute death row inmates using the electric chair. About 50 people joined in the protest.

The Rev. Larry Chitwood, who leads two congregations in The United Methodist Church's Memphis Annual (regional) Conference, preached that message May 27 at a prayer vigil in front of the Tennessee State Capitol in Nashville.

The Book of Discipline, the denomination’s law book, says the following:

“We believe the death penalty denies the power of Christ to redeem, restore and transform all human beings. The United Methodist Church is deeply concerned about crime throughout the world and the value of any life taken by a murder or homicide. We believe all human life is sacred and created by God and therefore, we must see all human life as significant and valuable. When governments implement the death penalty (capital punishment), then the life of the convicted person is devalued and all possibility of change in that person’s life ends. We believe in the resurrection of Jesus Christ and that the possibility of reconciliation with Christ comes through repentance. This gift of reconciliation is offered to all individuals without exception and gives all life new dignity and sacredness. For this reason, we oppose the death penalty (capital punishment) and urge its elimination from all criminal codes.”

More than 50 United Methodists and other Christians joined Chitwood in praying, protesting the death penalty and asking state leaders to reconsider a new Tennessee law that allows use of the electric chair when drugs are unavailable for lethal injection.

Before the vigil, Nashville Area Bishop William T. McAlilly wrote an open letter to Tennessee’s Gov. Bill Haslam urging the governor to reevaluate. The bishop, whose area includes the Tennessee and Memphis conferences, also published a blog on the legislation, saying the problem with capital punishment is that “it ignores the sacred worth of all human beings.”

“While we strongly believe in justice and accountability for those that commit all crimes, particularly those crimes that end the lives of other human beings, capital punishment limits the opportunities for God to transform the convicted person and the victim’s family through the power of forgiveness and reconciliation,” the bishop wrote in the letter. So far, the letter on change.org has garnered more than 290 supporters.

The governor signed what he called a “backup” method into law on Thursday, May 22, after the legislation won overwhelming support in the state’s General Assembly. The change is already drawingnational attention.

“When our entire country is going forward in so many ways, we seem to be going in the other direction,” said the Rev. Matthew L. Kelley, who at the bishop’s request organized Tuesday’s prayer vigil. Kelley is the pastor of Arlington (Tenn.) United Methodist Church and chair of the Church and Society committee in the Tennessee Annual (regional) Conference.

“As people of faith, we cannot abide by that. We do not believe that is the will of God.”

At present, eight states including Tennessee allow the electric chair to be used. But in most of those states, including Tennessee until last week, electrocution has been used only at the request of the condemned inmate. Nebraska used electrocution as its sole form of execution until 2008, when the state supreme court ruled the electric chair cruel and unusual punishment.

Tennessee follows other states scrambling to find alternatives to the usual lethal-injection drug regimen after drug manufacturers have cut off supplies to prevent their use in executions.

Lethal injection remains the primary means of execution for U.S. federal government, the U.S. military and all 35 states with prisoners on death row. States have been turning to different drugs, some made by lightly regulated compounding pharmacies that usually produce customized medications for individual patients. But these new drug regimens are facing increasing legal scrutiny after executions in Ohio and Oklahoma resulted in inmates writhing in pain.

Oklahoma, which like Tennessee now allows the chair, also has passed legislation to permit firing squads in the event both lethal-injection and electrocution are ruled unconstitutional.

At the same time, a growing number of states are rethinking capital punishment after some high-profile cases of death-row inmates being found innocent. Since 1973, 144 people on death row have been exonerated.

In 2013, Maryland became the sixth state in six years to abolish the death penalty, though the law is not retroactive.

Counter-protest at the vigil

At the prayer vigil, Chitwood delivered a homily based on John 8:3-11, in which Jesus helps a condemned adulterous woman escape death by stoning.

Jesus famously told the local authorities, “Let anyone among you who is without sin be the first to throw a stone at her.” Jesus then offers forgiveness to the woman and tells her to sin no more.

“For this redemption that we read about in the eighth chapter of John, it takes time and it takes conversation,” Chitwood said. “If we end that process in this age by putting someone to death, we rob them of the possibility that they will be redeemed.”

At the end of the sermon, Brenda Tindall, a woman in the crowd, shouted at those assembled: “I don’t agree with you.”

She asked if Chitwood had any children. He said, yes, a daughter. She asked how he would feel if his daughter were raped and murdered.

“I would have the same human response you would have,” Chitwood answered. “I would want retribution. I would want to hurt those people as well. But Christ calls us to something bigger and better. Christ calls us to overcome that need for retribution and allow God to deal with that. … And it’s not easy.” He also said he grieves along with those who have lost loved ones to crime.

Tindall, a member of Brentwood (Tenn.) Baptist Church, later emotionally described the torture and stabbing of a friend years ago. She then joined those at the vigil in singing “Amazing Grace.”

Tindall told United Methodist News Service that she came to the protest after hearing about it on local TV news that morning. She said she sees the death penalty as a deterrent to crime.

Tindall is not alone among Tennessee residents. A Vanderbilt University poll, released May 21, found56 percent of the state’s registered voters support the new measure to allow the electric chair.

But seeing the state approve the electric chair provoked the opposite response in the Rev. Karen Barrineau, pastor of Blackman United Methodist Church in Murfreesboro. “I’m opposed to capital punishment. But we’ve taken a step even further back from trying to be somewhat humane.”

Now she said is looking to get more involved in the fight against the death penalty.

“We are about restoration, reconciliation and resurrection,” she said. “It’s important that people be held accountable for their sins. Yet we can do it in ways that do not repeat those sins.”