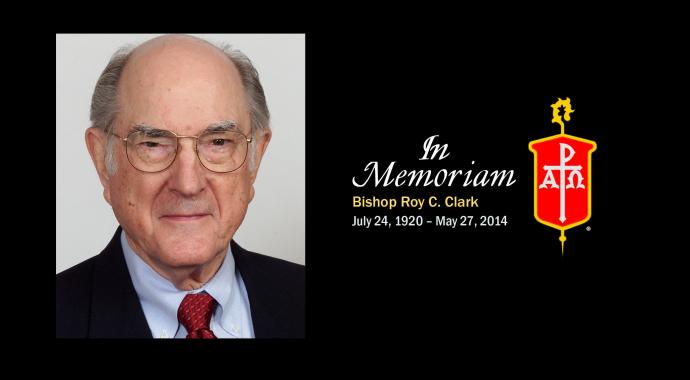 “He helped us to think theologically about the mission and message of the local church,” said retired Bishop Joseph E. Pennel Jr., a longtime friend.

“He saw the United Methodist movement as being both local and global — local meaning vital congregations that had a global impact.”

Clark was bishop of the Columbia (S.C.) Area, which encompasses the South Carolina Annual (regional) Conference, from 1980 to his retirement in 1988. But his denominational leadership extended far beyond South Carolina.

The bishop's work in the 1980s and 1990s “provided the theological grounding and inspiration for re-visioning the local church as the primary mission center for the denomination,” said New Jersey Area Bishop John Schol, a leader of the current initiative.

Clark “believed that every congregation is a mission station and is there to serve the community in which it’s located,” Pennel said.

Friends and colleagues all described Clark as an intellectual who did all the work of ministry with a deep theological perspective. He taught courses on United Methodism at seminaries both before and after his time as active bishop.

“He loved God with his mind more than anyone I have ever known,” said Don Marler, another longtime friend and minister of music at West End United Methodist Church in Nashville.

Clark was West End’s senior pastor when he was elected bishop, and was bishop-in-residence at West End at his death.

“In the way he approached ministry, in the way he preached, he always thought deeply,” Marler said. “And his theology was a thinking theology. … His mind, which was his greatest gift, was working until the very end.”

Clark was born July 24, 1920, in Mobile, Ala. He graduated from United Methodist-related Millsaps College in Jackson, Miss., and Yale University Divinity School. He was ordained an elder in Mississippi, where he eventually served five pastorates between 1944 and 1963.

The Rev. Inman Moore, a retired United Methodist elder who now lives in Pasadena, Calif., served in Mississippi about the same time as Clark. Moore eventually followed Clark as pastor of  the Methodist congregation in Wesson, Miss., a small-town junior-college community.

“Roy was always considered the saint of that church,” Moore said. “He was an excellent preacher, a very bright man and very affable. I liked Roy Clark immensely.”

Moore  and Pennel said that in the segregated South, Clark’s views on race were ahead of the time.

Clark eventually served as pastor of St. John’s in Memphis, Tenn., before being appointed to West End United Methodist Church. When he was elected bishop, he had spent 36 years as a local church pastor.

Impact on the denomination

“He provided strong guidance for UMCOR at a time when the organization was expanding its scope domestically and internationally,” said Thomas Kemper, the top executive of the United Methodist Board of Global Ministries. “Bishop Clark combined a scholarly temperament with pastoral sensitivity and practical wisdom.”

During Clark’s tenure, UMCOR responded to human suffering in war-torn Mozambique, famine in drought-stricken Ethiopia, and supported health and nutrition projects to save children’s lives around the world.

“He believed in the connection,” Pennel said, “and thought we could use that connection, especially for the poor, the marginalized and those who had been pushed aside.”

*Hahn is a multimedia news reporter for United Methodist News Service. Melissa Hinnen, director of content and public information at the United Methodist Board of Global Ministries, contributed to this story. Contact Hahn at (615) 742-5470 or newsdesk@umcom.org.