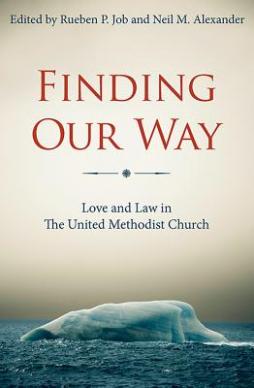 Book cover of "Finding Our Way." The book aims to provide “more clarity about the challenges and choices facing us,” say editors.

Should a church debate over same-sex marriage result in denominational divorce? Not if United Methodist bishops can help it.

Like the church members they lead, the bishops have differing perspectives on homosexuality and what the Bible says about it. The bishops also offer different suggestions for a way forward. Still, not one calls for the complete breakup, amicable or otherwise.

TO JOIN THE CONVERSATION

Visitministrymatters.org/findingourway to read more commentaries related to the homosexuality debate and share your thoughts on “Finding Our Way: Love and Law in The United Methodist Church.”

Retired Bishop Rueben P. Job and Neil M. Alexander, the president and publisher of the United Methodist Publishing House, initiated the work and served as editors of the 115-page volume of essays. Job also wrote a popular book on John Wesley’s teachings —“Three Simple Rules: A Wesleyan Way of Living.”

“We believe it is at times like these that we need most to draw upon the rich resources of our faith and Wesleyan tradition,” they told United Methodist News Service in a joint response by email.

“We plead for a quality and character of debate that is rooted in the saving grace of Jesus Christ, mindful of Wesley’s three simple rules and that demonstrates that the people called Methodists choose to grapple with controversial issues in ways that edify and build up the body of Christ.”

All royalties will be donated to the denomination-wide Imagine No Malaria effort to eradicate preventable deaths from the disease in Africa.

What bishops bring to the conversation

Job and Alexander sought participation of a diverse group of active and retired bishops, including episcopal leaders in Africa and Europe. They assigned bishops their topics and began collecting material in late February. The book came out in late April.

Contributors include both bishops who agree with the denomination’s current stance on homosexual acts as well as those who support change. Among the essayists is retired Bishop Melvin G. Talbert, who is now under a church complaint after officiating at the same-sex union of two men last year.

The Book of Discipline, the denomination’s law book, since 1972 has asserted all people are of sacred worth but the church considers the practice of homosexuality “incompatible with Christian teaching.” But for just as long United Methodists have debated that stance. The  General Conference, the church’s top lawmaking body that meets every four years, has consistently voted to keep the language and over the years has expanded on restrictions against gay clergy and same-gender unions.

That debate has intensified in recent years as more states in the United States and more countries around the world legalize same-sex civil marriage. Some United Methodist clergy publicly have defied the denomination’s ban on officiating at same-sex unions.

Bishops have an important role to play in the debate, Job and Alexander said. They note that in the United Methodist connection, bishops are set apart for a ministry of servant leadership that includes“an enquiring mind and a commitment to the teaching office.”

“We believe that we need more clarity about the challenges and choices facing us,” they said. “The bishops contributing to ‘Finding Our Way’ draw from deep wells of insight, experience, conviction and the gift of helping us read our landscape.”

Sierra Leone Area Bishop John K. Yambasu is the one African bishop who contributed to “Finding Our Way.”

In his essay, he notes that missionaries from England and the United States were among those who took Christianity to Africa, and they taught that sexual promiscuity, homosexuality and adultery are inconsistent with the teachings of scripture.

“Just as God instructed the Israelites to pass on the Ten Commandments from one generation to another, so the church in Africa has passed on this teaching from generation to generation,” Yambasu writes. “For us now to be told by the church in the United States that what we were taught in the Bible is not true could be traumatizing to African Christians.”

At the same time, Yambasu said, he denounces “any attempt by the church or by individuals to perpetuate any form of discrimination or hate against homosexual or heterosexual brothers and sisters.”

Like other bishops who contributed to the book, Yambasu argues against a split. Those who are gay and straight “need to accept the imperfections of each other and come together in prayer,” he writes.

Fort Worth (Texas) Area Bishop J. Michael Lowry writes that those who disobey church law on homosexuality are practicing a form of “unintended colonialism,” overruling the represented convictions of United Methodists outside the United States.

He calls for re-ordering church life but stops short of calling for a split along progressive and traditionalist lines.

“Perhaps the form will be more of confederation than a connection,” he says. “Perhaps our order admits and permits regional differences in doctrine. Perhaps we have no option other than to ‘trust God’ even as we struggle.”

Talbert, who has disobeyed church law, disagrees that he other clergy who officiate at same-gender ceremonies are defying the Bible or established church doctrine.

“The Bible is our book, too,” writes Talbert, who also was an activist in the U.S. civil rights movement against segregation. “Through the Bible we experience the liberating and redeeming love and grace of God, which embraces all humanity and creation — excluding none from the distribution of God’s grace.”

He adds that the Bible should not be used “to dehumanize or demonize anyone.”

Germany Area Bishop Rosemarie Wenner, a former Council of Bishops president, writes that faithful United Methodists in her country have varied ways of interpreting the Bible.

“I am convinced that we need to learn to live with our diversity related to human sexuality,” she said. “No matter what decisions are made at the next General Conference, we will continue to live as a denomination where people have different opinions on this issue and on many difficult questions.”

She takes encouragement from John Wesley, who in his sermon “Catholic Spirit” wrote: “Though we can’t think alike, may we not love alike? May we not be of one heart, though we are not of one opinion?”

A split in the denomination is a real possibility, Job and Alexander acknowledged.

“Perhaps the result of the current turbulence and division over a range of issues will lead to schism,” they told UMNS. “We hope not and do not see how drawing lines in the sand and choosing sides represents the best of our calling or our promise as the church of Jesus Christ.”