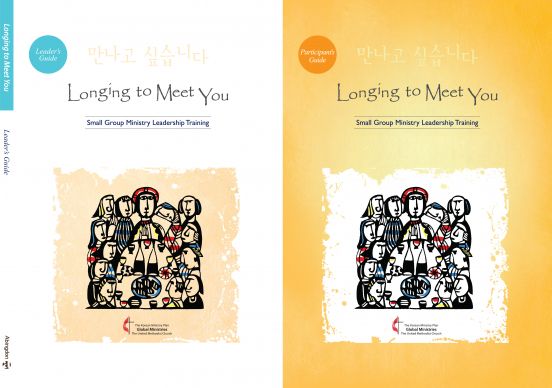 Composite of the leaders' and participants' versions of the Korean-American resource book titled “Longing to Meet You.”

Less can be more, small can be beautiful and small group ministry can lead to church growth and more meaningful Christian lives.

That last idea, especially, is embraced by Korean American United Methodists. The proof is in a new English-language translation of a small group ministry leader training guide.

Bishop Hee-Soo Jung, president of the denomination’s Korean Ministry Plan, calls the English translation “a gift from the Korean community for the revitalization of the United Methodist Church.”

The Rev. Paul Hak-Soon Chang, executive director of the Korean Ministry Plan, hopes the book will eventually be translated into other languages and reach far beyond the denomination.

For now, though, the aim is more specific and modest.

Korea is a country of mega-churches, with some far larger than the biggest in the United States. But among the throngs coming for worship are many who meet elsewhere in groups of seven to 12 for Bible study and mutual accountability and support.

“In the 21st century, people want to have a meaningful relationship within the church,” Ryoo said. “And in order to grow, in order to be mature as a Christian, you’ve got to have a good Christian community to grow in.”

The Korean-language original version of “Longing to Meet You” fills that gap with its emphasis on grace, including prevenient, justifying and sanctifying grace. It also offers stresses the importance of prayer, Bible reading and working through a series of questions aimed at providing an honest, supportive environment for Christian growth.

About 3,000 copies of two editions of the Korean-language version have been distributed, with roughly 300 clergy and 1,500 laypersons going through training sessions tailored to the book, Chang said.

The book already has begun to be used in the Korean Methodist Church, a separate denomination in Korea, he added.

Ryoo served as editor for the English-language edition, published by the United Methodist Publishing House's Abingdon Press and available in leaders’ and participants’ editions. Prumeh Kim — daughter of the Rev. Keyong Hee Lee of the Northern Illinois Annual (regional) Conference — handled the translation.

She had translated articles and sermons but never a full-length book. The experience, given the subject, was a labor of love.

“I’ve witnessed how churches grow through small group ministry,” she said. “For me, it was so exciting to bring those assets into Wesley theology.”

On the cover for “Longing to Meet You” is the late Japanese Christian artist Sadao Watanabe’s depiction of the Last Supper. The image is fitting, Chang said, since it shows Jesus in small group ministry with the disciples.

John Wesley did not make the cover, but his example, as well as his theology, informs the book.