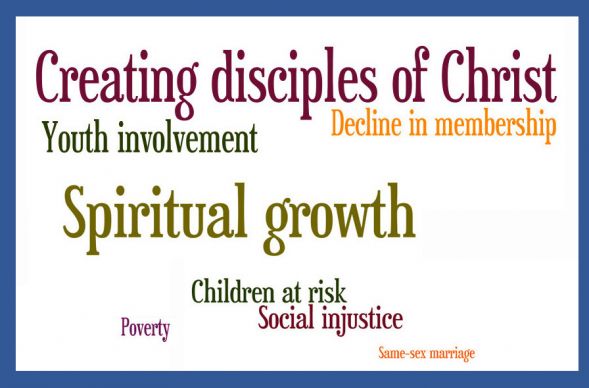 Wordle based on poll findings of most important issues facing The United Methodist Church.

Editor's note: This story was updated June 5 to better explain the survey's methodology.

When it comes to issues facing The United Methodist Church today, same-sex marriage ranks far down on the list.

That’s according to a new survey of church members across the United States. Nearly 4 in 10 United Methodists said the first or second most important issue facing the church is “creating disciples of Christ.”

THE MOST IMPORTANT ISSUES FACING THE UNITED METHODIST CHURCH (% OF MEMBERS)

The other most important issues, according to members, are youth involvement (27 percent); members’ spiritual growth (24 percent); decline in membership (19 percent); poverty (17 percent); children at risk (17 percent); and social injustice (16 percent).

Only 11 percent ranked sexual orientation and same-gender marriage as the first or second top issue facing the denomination. That puts the ongoing debates around human sexuality as eighth in importance to United Methodists, according to the poll.

The results come from a May 30-June 1 survey by email of 509 U.S. United Methodist lay members by Corporate Research of Greensboro, N.C., and Research Now of Dallas. The poll screened out pastors, retired pastors and paid staff at any level of the denomination to focus on the views of lay members, who sometimes can seem voiceless in churchwide discussions.

The 509 sample size — representing a denomination with about 7.4 million U.S. members — is a typicalstatistical sample of the kind seen in political and market research.

For example, most market research of large populations uses samples of 400 or fewer that have a 5 percent margin of error, 95 percent certainty. Gallup often will survey 1,000 people to represent the U.S. population of about 318 million.

United Methodist Communications, of which United Methodist News Service is a part, commissioned the research. The survey cost $7,500. The sample was identified by an outside company, and it was vetted twice to be sure the people included United Methodist members. UMNS had no role in the survey.

“This poll shows what really matters to the members of The United Methodist Church,” the Rev. Larry Hollon, top executive of United Methodist Communications, said in a statement. “It also clarifies that the people in the pews are more concerned about faithful living and changing lives for Christ than they are about some of the other issues that we hear so much about.”

The poll results come as United Methodist leaders have been spending an increasing amount of time and energy trying to address issues revolving around homosexuality.

On May 22, a group of 80 United Methodist pastors and theologians in a press release suggested an amicable split of the denomination, saying differences over homosexuality and other issues are irreconcilable. Meanwhile, more than 1,000 United Methodist clergy have expressed a willingness to officiate at same-gender weddings in violation of church law.

But nearly 90 percent of respondents to the new poll said The United Methodist Church should not split over issues related to human sexuality.

Those considering a denominational split broke down this way:

• 7 percent agreed with the statement: "These issues (sexual orientation and same-gender marriage) are the most important issues facing the church. If the church does not change its position on these issues, it should split."

• 5 percent agreed with the statement: "Making changes to the church’s positions on these issues is indefensible and I would support a split if this happened."

Sixty-three percent said the issue of sexual orientation and same-gender marriage is “diverting the church from more important things.”

At the same time, 74 percent said it is important to come to agreement on the issue at the next General Conference. The denomination’s legislative assembly will convene May 10-20, 2016, in Portland, Ore.

Seventy percent of respondents agreed with the statement: “The issue is hard, but God is bigger and unity of the church is stronger.”

"I think one of the key points in this research is that the people surveyed don't see the issue of human sexuality as the sole driver for the mission of the church," Hollon told United Methodist News Service. "It's one issue but not the sole driver that should determine whether we split or not. They are saying there are many important expressions of mission and ministry that also require attention. Foremost among these is making disciples of Jesus Christ for the transformation of the world."