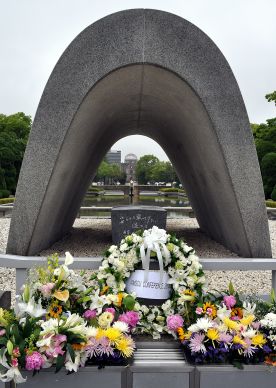 Photo by Kimberly Lord, United Methodist Board of Higher Education and Ministry

A wreath and flowers from the International Association of Methodist Schools, Colleges and Universities pay tribute to the lives lost in Hiroshima, Japan, on August 6, 1945.

History lessons trumped “book learning” for some 250 Methodist scholars and students from around the world as they gathered in this historic city.

The May 24-28 event was the triennial conference of the International Association of Methodist Schools, Colleges and Universities. Exploring “Peace, Reconciliation and Human Rights,” participants learned about the drastic effects of the world’s first atomic bomb that destroyed Hiroshima on Aug. 6, 1945, and explored ideas for creating a gospel of peace.

A CALL FOR PEACEMAKING

“God’s earth is aching for peace. Domestic strife, interpersonal violence and abuse, civil conflict, ethnic and racial clashes, religious schism and interfaith rivalry, terrorist attacks, wars between nations, and threatened use of nuclear, chemical, and biological weapons — all of these prevent us from achieving God’s shalom. In response we who are disciples of Jesus Christ are called to be peacemakers for the transformation of the world.”

Along with taking part in business sessions of the association, attendees heard scholars from Africa, Asia and the Pacific, Europe, Latin America and North America. They also received testimony from A-bomb survivor Koko Kondo, daughter of a Methodist pastor, and visited the Hiroshima Peace Memorial Museum and Peace Park.

“I think in every Christian’s heart, there ought to be anxiousness about peace, reconciliation and human rights,” said Mississippi Area Bishop James E. Swanson Sr., who serves on the association’s board of directors. “The God who is in you also resides in every other person. The church brings an understanding to this discussion because we believe that all of us are created in the image and likeness of God.

“Until we face the truth that we have hurt one another, we will not come to a place of reconciliation,” he added. “We must charge and commit ourselves to a new community because that is God’s will for us. The only way we’re going to get there is to keep having meetings like this. Keep working at it; keep working at it. Hold onto each other, even when a skeptical world does not know what we’re talking about.”

“The problem,” said Mark Harrison, “is none of the nuclear weapon states has any plan to … get rid of their nuclear weapons.” He is director of the Peace with Justice Program for the United Methodist Board of Church and Society.

“Nuclear weapons are cruel, inhumane, do not distinguish between combatants and non-combatants, and cannot be limited to the battlefield in either time or space,” said Steven Leeper, head of theHiroshima Peace Culture Foundation.

“The largest bomb in the U.S. arsenal,” he continued, “is about 100 times the size of the atomic bomb that destroyed Hiroshima. We’ve banned several weapons, but we refuse to ban the most powerful one that could literally mean the extinction of our species.

“Of all the problems we face, nuclear weaponry is the easiest one to solve. If we fail to solve this, the simplest of problems, we will not be around to solve any others.”

A highlight of the weeklong event was a visit to the Hiroshima Peace Memorial Museum and Peace Park. Witnessing the skeletal remains of the Hiroshima Prefectural Industrial Promotion Hall (Atomic Bomb Dome) and the offerings of flowers and paper cranes at the Cenotaph for the A-Bomb Victimsand the Children’s Peace Monument brought history to life, poignantly and graphically.

“One could hear the real story about what happened in 1945,” said Ivan Milosi Mumba, a student from the Democratic Republic of Congo attending United Methodist-related Africa University in Zimbabwe. “I learned it in high school, but the way I learned it was to read from a book, so it was totally different from seeing it. It really impacted me a lot.”

Vivian A. Bull, president of United Methodist-related Drew University in Madison, N.J., said it was a “wonderful opportunity” to be in Hiroshima and “see it in the eyes of the people who are living and working.”

“The young students who provided the tour leaders were very impressive.”

Keep peace at the center

Amos Nascimento, special assistant for global education and new initiatives at the United Methodist Board of Higher Education and Ministry, said the conference once focused on the chief executives and presidents of universities, but organizers realized they needed faculty and students as well.

By bringing together young people and faculty from around the world, said the Rev. Roger Ireson, organizers hoped to “start a new energy … that would result in exchange of ideas, of programs, of reminding the world of what is at the core of education for the Methodist church: to specialize in quality education but also in a deep, deep value system. That is what we started to do, and it’s working beautifully and I couldn’t be more pleased.” Ireson is professor of philosophy and religion at United Methodist-related Martin Methodist College, Pulaski, Tenn.

During the closing worship, San Antonio Area Bishop James E. Dorff shared about losing his academic regalia on the way to Japan.

“My soul was troubled,” he recalled. “I did not have peace.” Then he discovered he had left his academic dress on an airport shuttle bus.

“Why was losing my regalia a big deal?” he asked. “Because that is the good stuff about me that says who I am.

Dorff, president of the Board of Higher Education and Ministry, urged attendees to keep peace at the center of their lives.