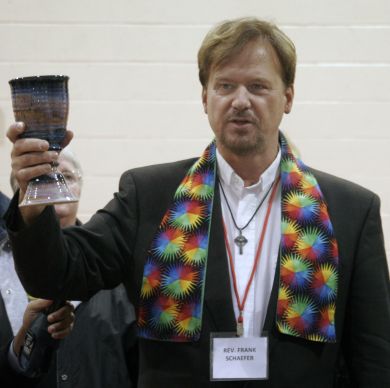 The Rev. Frank Schaefer serves Communion to his supporters at the end of his two-day church trial held Nov. 18-19, 2013 in Spring City, Penn. He subsequently was stripped of his clergy credentials.

A United Methodist regional appeals committee will convene on June 20 to hear an appeal from Frank Schaefer on the loss of his ministerial credentials as the result of a church trial held Nov. 18-19, 2013.

The hearing of the Committee on Appeals of the Northeastern Jurisdiction of The United Methodist Church will begin at 10:30 a.m. ET at the Baltimore-Washington Airport Marriott. Schaefer, the former pastor of Zion United Methodist Church, Iona, Pa., was found guilty of violating church law by conducting a same-sex marriage ceremony for his son.

Jen Ihlo, president of the Northeastern Jurisdiction Committee on Appeals and a member of the Baltimore-Washington Annual (regional) Conference, said the committee would work in accordance with the United Methodist Book of Discipline.

The committee includes four ordained clergy, one diaconal minister, one full-time local pastor and three lay people. Members of Schaefer’s episcopal area, which encompasses the Eastern Pennsylvania and Peninsula-Delaware annual (regional) conferences, must recue themselves from the case.

No witnesses will be heard during the appeal. The committee may consider the records of the trial and the arguments of counsel. By a majority vote, the committee may sustain the findings, reverse the penalty in whole or in part or remand the case to a new trial.

A trial jury of ordained clergy from the Eastern Pennsylvania Annual (regional) Conference found Schaefer guilty of violating the denomination’s law book and of disobedience to the order and discipline of The United Methodist Church.

In the penalty stage of the trial, the court suspended Schaefer from his ministerial duties for 30 days and declared that if he could not “uphold the Discipline in its entirety” at the end of the suspension, he would surrender his credentials.

On Dec. 19, 2013, Schaefer met with the Eastern Pennsylvania Conference Board of Ordained Ministry and told them he could not agree to uphold the Discipline’s ban against performing same-sex marriages.

Schaefer and his legal counsel, the Rev. Robert E. Coombe, filed an appeal after the board of ordained ministry “deemed his ministerial credential surrendered.”

The appeal stated that “the penalty assessed by the trial court was in violation of Church law, which prohibits trial courts from conditioning reinstatement of a suspended elder on his proof of good conduct and from imposing a penalty based on what a pastor may intend to do in the future.”

The Book of Discipline since 1972 has stated that all people are of sacred worth but “the practice of homosexuality is incompatible with Christian teaching.”

Church law says that marriage is to be between a man and a woman and bans United Methodist clergy from performing and churches from hosting “ceremonies that celebrate homosexual unions.”