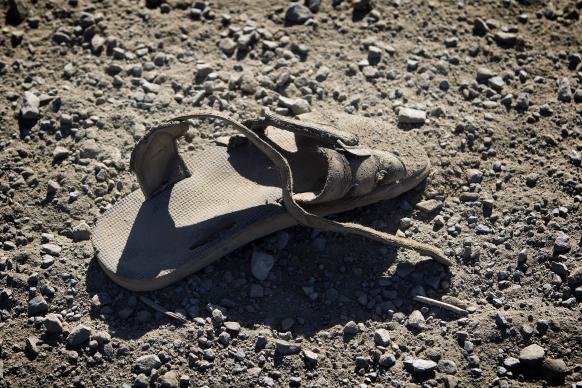 In recent months, the numbers of unaccompanied minors from Central America crossing the U.S. border has surged, drawing both concern and criticism. In this file photo, an abandoned sandal lies just across the border from Mexico near Friendship Park in San Diego.

United Methodists are joining with other religious leaders to provide hospitality and basic needs for hundreds of Central American women and children entering the United States illegally and dropped off at bus stations in Tucson and Phoenix, Ariz.

“These women have been incarcerated by ICE (U.S. Immigration and Customs Enforcement) but are dropped off with paperwork that gives them ‘human parole.’ This means that they are allowed to go to different places in the U.S. where they have relatives,” Brady said.

“But they are only given a certain amount of time to get in touch with the local immigration office. If they don’t check in, they are immediately deportable.”

In recent months, the numbers of unaccompanied minors from Central America crossing the U.S. border has surged, drawing both concern and criticism.

A makeshift processing center set up by the U.S. Border Patrol in Nogales has been overwhelmed, the New York Times reported. As of June 18, 900 children from Guatemala, El Salvador and Honduras were being held there, officials said.

Brady and United Methodists from other local churches quickly started putting together health kits after they saw Arturo Garino, mayor of Nogales, Ariz., talking about the children who were fleeing from Honduras, Guatemala and El Salvador because of political persecution and drug cartels.

“No matter what side of the immigration debate you’re on, no one wants to see a child suffering or in need,” Brady said, adding that the news “hit me between the eyes.”

The 184 kits assembled by youth and adults from local United Methodist churches were delivered to Nogales City Hall. At that time, the mayor gave the group a briefing on what is happening.

“Mayor Garino shared that he was only given 48 hours (notice) by the (U.S.) Border Patrol before all the children were to be delivered,” she noted.

Garino and his wife, Cathy,” gathered supplies from local churches and other donors in Nogales. “We did ask him what we, as United Methodists, could do for these children, and Mayor Garino replied that we needed to tell our church people to hold off right now on donations. He would let us know when more things could be given.”

Kevin Courtney, a lead organizer with the Pima County Interfaith Council and Interfaith Community Services, is working with clergy and church leaders in this crisis and another one occurring at the border in Texas, where many unaccompanied minors crossing the border.

The June 22 training included a list of basic steps in assisting immigrants including bringing hygiene products, clean clothes and jackets or sweaters for cold bus stations; providing a hot meal and assistance buying bus tickets for final destinations and offering to let them use cell phones, Brady said.

“The Casa Mariposa’s facility was packed to capacity so they are looking for people that would possibly able to take them overnight until they could get on the next bus,” she said.

Before leaving Tucson, Haralson bought diapers with leftover donation money, and she and Brady made plans to return with more health kits, coordinating distribution with Catholic Family Services.

“We also bought fleece from a remnant outlet, and I'll be organizing youth to make baby and children’s blankets,” Brady said.

United Methodist Women has expressed deep concern about the child refugee crisis at the border and the decision by President Obama to postpone a Homeland Security deportation enforcement review, as noted in a June 16 letter to President Obama by Harriett Jane Olson, UMW’s top executive.

“We implore you to take the actions the White House can implement now, including directives to stop detaining and deporting people simply because of their immigration status and mechanisms to provide provisional status until a legalization bill becomes law,” she wrote.

“Mr. President, we will keep fighting for humane and genuine immigration reform legislation, but our immigrant families can't wait a day longer -- particularly as the Republican Party looks inward at Majority Leader Eric Cantor's primary loss and refuses to address our nation's great moral crisis. Mothers, fathers, daughters and sons need to know that you stand for justice and family unity, not flawed political calculations,” she said.

Carcaño and Olson were both arrested in front of the White House on President’s Day in a peaceful demonstration against U.S. immigration deportations.