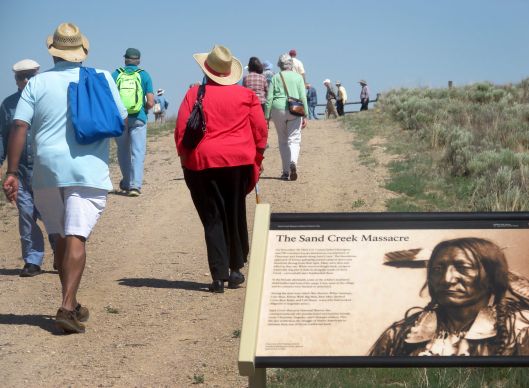 For the Rev. Sid Spain, just being here, walking the obscure and arid plain where the Sand Creek Massacre occurred, turned historical abstraction into something he could truly imagine.

He paused on a sandy path, the sun beating down, the wind swirling and carrying birdsong.

“I almost didn’t come,” Spain said. “There are so many issues facing the church, and I thought maybe this was tangential. I was wrong.”

This year’s United Methodist Rocky Mountain Annual (regional) Conference gathering became a two-day teach-in on the Sand Creek Massacre. It was a Methodist clergyman-turned-soldier, Col. John Chivington, who on Nov. 29, 1864 ordered the cavalry charge that slaughtered an unsuspecting, peaceful village of Cheyenne and Arapaho Indians.

“Today is a little bit beyond belief for me,” Stanovsky said to the group at a conference dinner that night, back in Pueblo, Co. “I knew I had to bring you to the site. But I didn’t know if you’d come. And you came!”

Indeed, the throng nearly outnumbered Chivington’s cavalry and constituted the largest single day of visitation at the Sand Creek site — one of the newest and most out-of-the way in the National Park Service — since its 2007 dedication.

Al Addison, an Arapaho whose great-great grandfather survived the massacre, has visited the site more than 60 times, but doing so in a crowd of United Methodists touched him.

“I can tell the church has compassion,” he said.

The United Methodist recognition of injustice against Native peoples, including by Methodists, is not new. But when Stanovsky arrived to lead the Rocky Mountain Conference five years ago, she determined that the history was much darker and relations much more strained than had been acknowledged.

While the 2012 United Methodist General Conference, the denomination’s top legislative body, saw an Act of Repentance Toward Healing Relationships with Indigenous People service and the passing of legislation committing the denomination to further action,  Stanovsky has focused the Rocky Mountain Conference on the Sand Creek Massacre.

She personally undertook not just to learn the history in detail but also to build relationships with descendants of the survivors.

“She touched my heart, the first time I heard her,” said Henry Little Bird, an Arapaho from Oklahoma who joined in the site visit. “I’m here to support her.”

This year marks the 150th anniversary of the massacre, and the Rocky Mountain Conference integrated remembrance and teaching into liturgy, prayers and nearly every other aspect of the first two days of its annual gathering.

Conference members heard in full the Sand Creek story, including that two officers — Silas Soule and Joseph Cramer — ordered their men to “stand down” rather than participate in an attack that mostly killed mostly women, children and the elderly.

They learned as well that the Colorado Territory governor of the time, John Evans, was a Methodist who so ardently defended the rights of settlers that he helped create the climate in which the massacre occurred, and defended Chivington’s conduct despite a U.S. congressional panel’s finding that he had “surprised, and murdered, in cold blood … unsuspecting men, women, and children.”

(Evans helped found the University of Denver and Northwestern University, and the latter’s location, Evanston, Ill., is named for him. Both universities have assembled panels to study his conduct as territorial governor, and Northwestern recently issued its report.)

Stanovsky devoted the first half of her Thursday, June 19, episcopal address to the threats of schism in The United Methodist Church, but in the second half directly addressed Methodist complicity in the Sand Creek massacre.

“None of us Methodists in this room personally participated in the events of 1864 and yet we are who we are, we are where we are, we have what we have, we live where we live, because of this history,” Stanovsky said. “And we participate in patterns of privilege and poverty that are shaped by this history. And so we are called to repentance.”

Native Americans leaders of The United Methodist Church joined historians and descendants of massacre survivors in speaking to clergy and lay delegates.

Henrietta Mann, founder of the Cheyenne and Arapaho Tribal College in Oklahoma, and a great-great-granddaughter of a Sand Creek Massacre survivor, thanked the conference for honoring her ancestors’ memory, and paid tribute to Soule and Cramer.

But Mann also noted that “inter-generational trauma” persists among Cheyenne and Arapaho because of the massacre. She also said federal policy abetted missionaries who force-fed Christianity and separated Native American children into boarding schools where native ways and languages were not allowed.

“The church and state worked together to eradicate our culture,” Mann said.

Stanovsky described Friday’s visit to the Sand Creek site as a religious pilgrimage, and no doubt conference officials were praying they could meet the considerable logistical challenges.

The first of the buses headed east from Pueblo around 7 a.m. Each carried either a descendent of the massacre or a Native American United Methodist, to share thoughts and answer questions. Conference members also were given a booklet titled “Pilgrimage to the Sand Creek Massacre,” containing pertinent documents, such as Soule’s account of the massacre.

The Sand Creek site is 23 miles from the nearest town of any size, Eads, and the last few miles are by dirt road. As the buses began to arrive around 10 a.m., and people began to disembark, designated clergy, including Stanovsky, stood by to apply ashes to foreheads or hands — another underscoring of the visit’s religious nature.

The Rev. Skip Strickland, a district superintendent in the conference, was among those offering ashes. He helped plan the pilgrimage.

“The intent was to bring at least a group here,” Strickland said. “But as we listened to the descendants, we discovered how important it was for everyone to have the experience.”

For the next few hours, in staggered groups, conference members and others — including Chicago Area Bishop Sally Dyck and retired Bishop Roy Sano — made their way around the long, unshaded paths of the site. Most walked, a few rode in motorized wheelchairs, one hobbled along on crutches.

They read historical markers and quizzed park rangers about what happened where in a landscape relieved only by a few cottonwood trees, hard by a creek bed that often runs dry.

From one small group, Ranger Shawn Gillette fielded the question of why Chivington would order an attack on a village where the peaceful Chief Black Kettle flew both the U.S. flag and a truce flag.

Gillette noted that in late 1864, Chivington’s fortunes as a military leader seemed to be falling, and that he would testify after the attack that he had believed the Cheyenne and Arapaho at Sand Creek to be hostile.

But Gillette stopped short of offering those as real explanations.

“We have a lot of theories, but no hard and fast proof,” he said.

Gillette added that the death toll among the Cheyenne and Arapaho, previously estimated at 150-160, now is understood to be about 200, thanks to the identification of previously unknown women and children.

“That number will grow as we do more research,” he said.

Perhaps inevitably, the experience of walking the site led some to think about concrete reconciliation actions they and the church might take.

Larry Boven, a Sunday school teacher at Louisville United Methodist Church, in Louisville, Colo., said he would be focused on pushing the U.S. government to do more toward protecting the rights of indigenous peoples worldwide.

“I can’t personally go back 150 years and tell somebody, ‘God, I’m sorry,’” Boven said. “But I can certainly, as a person, take responsibility for what’s going on now.”

Mark Simmonds, after conversing with Henry Little Bird at the site, argued that The United Methodist Church should consider committing to major financial assistance to the Cheyenne and Arapaho.

“It’s great having a pilgrimage, but how can we help long term?” said Simmonds, a member of Fleming United Methodist Church, in Fleming, Colo., and a volunteer fundraiser for the denomination’s Imagine No Malaria campaign.

Stanovsky, who is part of the state of Colorado’s Sand Creek Massacre Commemoration Commission, has made clear that she means to build on the Rocky Mountain Conference’s attention to the event.

And in the run-up to it, the three — all Native Americans — issued an open letter to The United Methodist Church, containing a seven-point plan for how acts of repentance can avoid being “token in nature.”

But in the aftermath of the Sand Creek site pilgrimage, there seemed to be a consensus that the Rocky Mountain Conference had, under Stanovsky, demonstrated a new level of commitment and seriousness.

The Rev. Charles Schuster, chair of the conference’s Task Force on the Acts of Repentance, noted that there were “many hopes” emerging from the experience.