The Rev. Cynthia Abrams, director of health and wholeness at the United Methodist Board of Church and Society, speaks during a February rally for health care in front of the U.S. Supreme Court. Over Abrams' left shoulder is the Rev. Susan Henry-Crowe, top executive of the agency.

The U.S. Supreme Court’s decision to uphold subsidies for health insurance bought on the federal exchange comes as a relief to many United Methodist clergy and lay church employees. The ruling also affects millions of other Americans.

Four United Methodists conferences currently send all or some of their local church employees to buy insurance on the exchanges.

The Rev. Shelly Forrest, pastor of El Paso United Methodist Church in the Illinois Great Rivers Conference, is among those grateful subsidies will continue. She receives a subsidy of $80 a month to help buy insurance since her conference canceled its group insurance plan.

“Wow! Great! That IS good news. That’s nearly $1,000 per year that we can use for our family’s needs and/or being generous in other ways,” Forrest said.

She also noted others would endure even more financial hardship if the decision had gone the other way.

The case did not involve a constitutional question. At issue was a dispute over statutory interpretation: Does the Affordable Care Act authorize the Internal Revenue Service to provide tax subsidies for people in the 34 states that rely on the federal health insurance marketplace?

The individuals who brought the lawsuit contended it only allowed subsidies on state-established exchanges.

The majority opinion, written by Chief Justice John Roberts, acknowledges that the challengers’ “arguments about the plain meaning … are strong.”

But the ruling goes on to say: “In this instance, the context and structure of the Act compel us to depart from what would otherwise be the most natural reading of the pertinent statutory phrase.”

In summary, the decision says the plain reading of the contested section would leave the health care law basically intact but functioning poorly. The law, also known as Obamacare, provides the subsidies to help people afford the health insurance everyone is now required to buy.

At present, about 6.4 million Americans receive subsidies to help pay for private insurance on the federal marketplace, according to the Centers for Medicare and Medicaid Services. To put that in perspective, that number is close to the entire population of Tennessee.

Subsidies are tied to household income. Nationally, the average subsidy is $272 per month. The opinion noted that 87 percent of the individuals who bought insurance on a federal exchange did so with the tax credits.

Patricia L. Miller, a United Methodist and Republican state senator in Indiana, said she personally is opposed to the Affordable Care Act but thinks the Supreme Court made the right call in this case.

“To penalize states that have not set up their own exchanges would be a mistake,” she said. Miller is also executive director of the Confessing Movement within The United Methodist Church, an unofficial evangelical advocacy group. The group has not taken a position on the law.

Andrew Q. Hendren, general counsel for the United Methodist Board of Pension and Health Benefits, said the Supreme's Court ruling provides some certainty in the U.S. health market.

"This will allow the employer coverage market and health care industry generally to continue to adjust strategies and business practices to the Affordable Care Act without major reversals or shifts," he said.

This marks the second time the Supreme Court upheld a key part of the law. In 2012, the court rejected a challenge to the constitutionality of the insurance mandate.

“We should start calling this law SCOTUScare,” wrote Justice Antonin Scalia in the current case’s dissent.

Conferences have seen the new health care law as a game changer that relieves them and local churches of one of their greatest financial burdens. 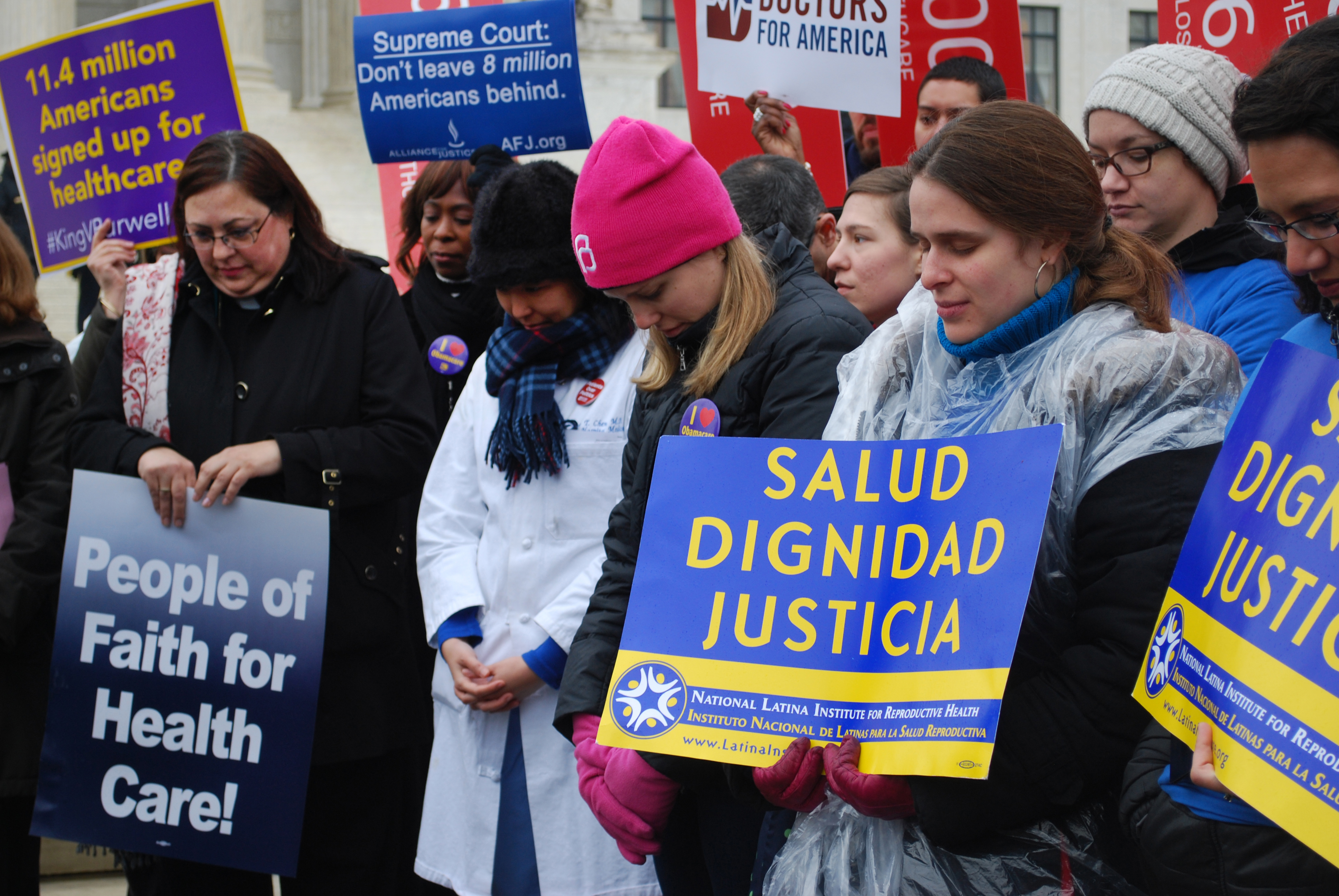 Participants pause for prayer pray during a rally at the U.S. Supreme Court regarding King vs. Burwell. Photo courtesy of United Methodist Board of Church and Society

The conferences currently utilizing the new insurance marketplaces are Illinois Great Rivers, Northern Illinois, Florida and the Great Plains, which encompasses United Methodists in Kansas and Nebraska. The Arkansas Conference is scheduled to end its group plan in December and send employees to the insurance marketplace starting in 2016.

All of these conferences are in states that rely on either a federal exchange or a “partnership exchange” that uses theHealthCare.gov portal. All stood to be affected by the high court’s ruling.

The problem many conferences face, say benefits officers, is providing health care to an aging and often ailing risk pool.

As of 2014, the United Methodist-related Lewis Center for Church Leadership reported that the median age of elders is 56, that of deacons is 55 and that of local pastors is 57. Surveys also repeatedly have found United Methodist pastors in the United States have a higher incidence of health problems than their peers, mostly due to stress.

In The United Methodist Church, conferences historically have taken on the primary responsibility for sponsoring or participating in a group health plan that covers full-time clergy and lay employees in the United States.

Local churches generally contribute to the health benefits of their pastor and other workers through apportionment payments, direct bills or a combination of the two. The Book of Discipline, the denomination’s law book, does not require conferences to cover lay employees at local churches and other extension ministries.

Benefit officers say using the insurance marketplaces saves money that local churches can spend on other ministries. Conferences may also be able to appoint more clergy.

Mona Williams, Arkansas Conference benefits officer, said many Arkansas churches were contributing up to $20,882 toward a clergy family’s health insurance.

Because the conference’s current group plan is self-funded, the conference ultimately is responsible for paying medical claims. The past three years, those claims topped $5 million.

Arkansas Conference members voted 639 to 61 to discontinue the conference’s group plan in December. Under the new plan, churches are asked to give their employees at least a $12,000 raise to help pay for insurance. But Williams is confident many also will qualify for subsidies as well.

To qualify for subsidies, people generally must have a household income between 100 percent and 400 percent of the federal poverty level and not have access to another source of affordable health insurance coverage. That’s around $46,000 for a single person and $90,000 for a family of four.

“I think when people see that… they are going to be pleasantly surprised,” Williams said. As a conference employee, she also will be among those shopping on the exchange.

Forrest, the Illinois pastor, said she is thankful for the relief going on the exchanges provides for her local church.

“My current church was able to afford our group policy, but one of my previous churches (a much smaller church) was struggling financially,” she said. “I think that is true of many of our smaller congregations. I am thankful for the amount of money that this frees up so that the church can be more about ministry than about providing me with health care.  It also takes the pressure off the annual conference for being the ‘bad guys’ who insist on placing this heavy burden on the congregations.”

In 2012, General Conference amended the Book of Discipline to allow conferences to end their group health plans if, regardless of their health status, employees can find affordable coverage through health insurance exchanges or another mechanism.

The United Methodist Board of Church and Society, the agency charged with advocating for the denomination's social teachings, was among religious groups that advocated for the law’s passage in 2010.

From the Book of Discipline, which outlines church law, teachings and organization:

The Social Principle on the “Right to Health Care,” which states “health care is a basic human right.”

From the Book of Resolutions, the denomination's statements on social issues:

"Health and Wholeness," first adopted by the 1984 General Conference

“Maternal Health: The Church’s Role”approved at the 2012 General Conference

The Rev. Susan Henry-Crowe, the agency’s top executive, was one of six faith leaders who spoke at a rally outside the court during King v. Burwell’s oral arguments.

She and other members of the Washington Interreligious Staff Council Health Care Working Group released a statement June 25 applauding the ruling.

"The United Methodist Church says 'health care is a basic human right,'" she said. "We are relieved that that the Supreme Court upheld the intention of Congress to ensure that people will continue to receive health care subsidies. We believe this decision upholds the common good for all.”

Going back to its founder John Wesley, the Methodist movement historically has made health care a primary focus of ministry.

Wesley preached on the biblical mandate to care for the sick, and he set up the first free public clinic in London, which he ran until it became too expensive for his limited resources.

United Methodists also have a denomination-wide commitment to global health, leading efforts to fight HIV/AIDS and eliminate preventable deaths from malaria in Africa.

But the denomination's official position is that the church and its members cannot provide comprehensive health care alone. The Book of Discipline, the denomination’s book of law and teachings, says “it is a governmental responsibility to provide all citizens with health care.”