Rev. Ximena A. Diaz-Varas Appointed to Serve as Assistant to Bishop Bickerton

Rev. Ximena A. Diaz-Varas Appointed to Serve as Assistant to Bishop Bickerton

It is with great pleasure that we announce that Rev. Ximena A. Diaz-Varas has been appointed to serve as Assistant to Bishop Bickerton, effective July 1, 2021. She replaces Rev. Robert Walker, who is retiring after eight years in the role where he faithfully served five bishops and under Bishop Bickerton for nearly five years.

For Rev. Diaz-Varas—the current Pastor of First United Methodist Church of Torrington, in Connecticut—this new appointment is an apt continuation of her personal calling: To help equip the ministry of the saints, while training and empowering the laity to become closer to the living God.  She believes that the United Methodist Church's future depends upon developing a healthy relationship between the clergy and the laity, working together as a team to build Christ's church and God's beloved community, as inspired by the Holy Spirit.

Clearly, Rev. Diaz-Varas is just the woman for such a time as this.

Rev. Diaz-Varas was born in Santiago de Chile. She’s the proud daughter of Moises Diaz, a chemist at the Chilean Air Force, and Irene Chamorro, a high school math teacher. She was raised in the Roman Catholic church. As a teenager, she felt God calling her to a life of service, but saw that her only option was to become a nun. “I knew I could not give up my family, nor the possibility of forming my own family in the future, so I gave up that idea,” she says. After high school, she studied computer science in college. 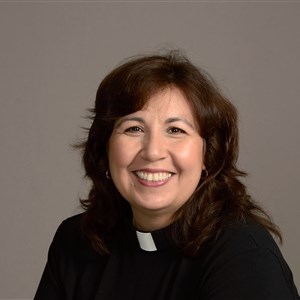 Rev. Diaz-Varas married Jorge Varas in 1993 and, two years later, emigrated with her husband and father to the United States. When a close friend invited them to a baptism at the First United Methodist Church of Shelton, the entire family immediately felt a connection. “To make things more interesting,” Rev. Diaz-Varas adds, “I saw that a woman could be a pastor for the first time.”

The feelings that Rev. Diaz-Varas once felt as a teenager returned. She became a United Methodist because of the denomination’s commitment to a social Gospel. “You use your voice, as inspired by God’s Word and the Spirit, to speak for the marginalized and the voiceless,” she says.

Soon, the young wife began to explore her call under the direction of Rev. Heather Sinclair.

Rev. Diaz-Varas became one of the first Certified Lay Ministers (CLM) in the New York Annual Conference (NYAC) in 2009. She served as CLM at the First UMC of Shelton from 2009 to 2014. In July 2014, she was appointed at Saint Andrew's UMC as their pastor (First CLM in the Conference to offer an appointment). In February 2015, she completed all the District Committee on Ordained Ministry (dCOM) requirements and became a Licensed Local Pastor.

In July 2019, Rev. Diaz-Varas was appointed to the First United Methodist Church of Torrington. Prior to becoming a local pastor, she completed her training as a Chaplain at Griffin Hospital. This training has informed her style of pastoral care.

“One thing that has been clear in my journey is God making ways for me when there seems to be no way. That was true when I became a certified lay minister and when I received the call to become a pastor and now in this new role,” Rev. Diaz-Varas explains. “I trust in God's guidance as I strive to serve God through these new appointments to the best of my abilities.”

On the Conference level, Rev. Diaz-Varas is active and engaged, having served in a number of different roles—including as Chairperson of the Connectional Ministries Visioning Table, where she is active as the past Chair.

A Warm Welcome from Bishop Bickerton

While there is no doubt that Bob will be missed, I am pleased and extremely excited that Ximena has agreed to step into this position, Bishop Bickerton says.

“She is a person that has great attention to detail, engages every opportunity she faces with passion, and garners respect with the integrity she brings to each situation,” he explains, adding that she “brings with her a joyful spirit and presence that will be a great asset. For those that know her, this appointment will surely be greeted with support.  For those that have not yet encountered Ximena, I believe they will quickly see why she is a positive choice for this position.”

Rev. Diaz-Varas is already a very familiar face to most at the Conference office.