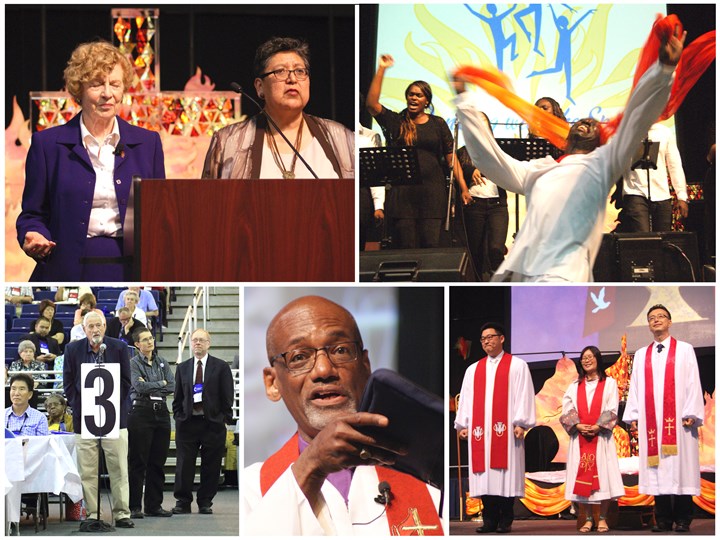 The 216th session of the New York Annual Conference from June 10-13 opened with a joint worship service for clergy and laity at Hofstra University.
“In the next four days, the most important thing we must do is be open to the outpouring of God’s grace,” interim Bishop Jane Allen Middleton said echoing the theme for the gathering, “Dancing With the Spirit: Conference as a Means of Grace.”
“The Spirit of the Lord is upon us . . . Will you allow yourself to be healed as we experience God’s grace in this place?” asked Middleton, who also expressed her joy in returning to the NYAC, her “spiritual home.” Middleton was a member of the New York Conference before being elected to the episcopacy in 2004. She began her service as bishop for the New York Area on January 1.
The bishop shared that she sees her purpose in the conference as threefold: to heal, empower and prepare. The conference is still grieving the unexpected passing of Bishop Martin D. McLee, and the resulting whirlwind six months with four different episcopal leaders.
The worship service offered a touching video tribute to Bishop McLee, who died on September 6, 2014. Through a montage of photos and the sound of his voice, the gathering was reminded of the legacy McLee left behind in the short time that he led the conference – and of his ministry that will carry on.
Middleton also expressed the need to put in place structures to empower the ministry of our churches and allow transformation of the world for Jesus Christ.
“We cannot wait for the next bishop,” she said. “We must live as if Jesus has come again and is in our midst,” she said. Middleton noted that diversity and generosity are two of the conferences greatest assets.
“We are the most diverse conference in the Northeast Jurisdiction by a mile,” Middleton noted. “We are colorful, we are God’s rainbow. How rich it is to be able to learn from each other . . . All means all, including the LGBTI community. We need to honor diversity in all ways and have respect for all persons.”
Middleton said that preparations are already being made for the next bishop. A focus group is exploring the gifts and graces needed in our next episcopal leader. Much needed renovations of the conference center and the purchase of a new episcopal residence should be completed by September 2016, she said.
At various times during the plenary sessions, Middleton invited members of the body to share their witness of how annual conference had been a means of God’s grace in their lives. An anointing service and an altar call also offered moments for healing and experiencing God’s grace.
The gathering participated in a poignant service of repentance with Native American representatives on Friday morning. The sound of a drum and the call of a lone voice prepared the body to hear words of welcome from Shinnecock Nation representative, Rev. Holly Haile Davis.
Speaker Cynthia Kent, chair of the Northeast Jurisdiction Native American Ministries Committee and a member of the Southern Ute Indian Tribe, asked, “What kind of Methodists are you going to be?” Will you sit back and let the Native Americans fix this themselves? Or will you stand together as children of God?”
The conference entered into a commitment of five concrete actions that would enable its members to make the journey together. In making a symbolic commitment to this new covenant and relationships, members tied gray ribbons to the wrist of the person next to them.
Retired Bishop Ernest Lyght, who has served the New York Conference as both resident bishop and interim, was the guest preacher for the commissioning and ordination service.
“Remember, this is not your call. This is God’s call,” Lyght said to the candidates and clergy gathered for Saturday morning’s celebration of ministry. “If God sends you, God will qualify you.”
Lyght likened a life following Christ to that of a marching band.
“I’ve seen people walking all raggedy in a band,” he said. “They’re all out of step . . . it’s easy to fall out of step, but we need to get in step with Jesus Christ.”
In other highlights, the gathering:

In legislative action, all but three of the petitions and reports considered in the legislative sections were placed on the consent calendar. The three petitions – support for the Walk to Emmaus, fossil fuel divestment, and changes to the Discipline paragraph 161.F on human sexuality – were all passed in plenary.
Sixteen of the approved petitions will be submitted to the 2016 General Conference for consideration. The 16 deal with issues of accessibility, discrimination of those with disabilities, eliminating the effects of racism, regulation of E-cigarettes, gender identity, religious liberty, and codified discrimination in the Book of Discipline.

In other action, the conference:
In a comparison of 2014 and 2013 conference statistics: – Rev. Joanne S. Utley
Communications coordinator for the New York Conference