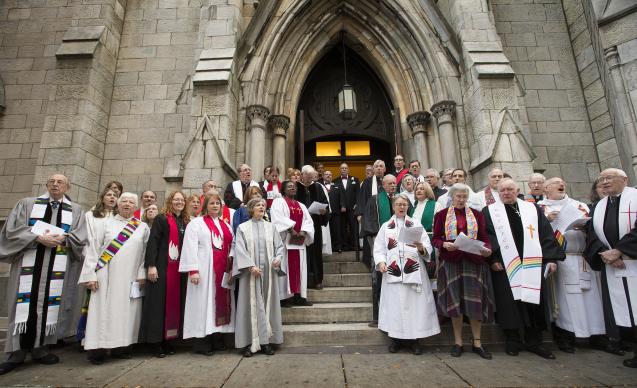 Clergy and faith leaders gather outside Arch Street United Methodist Church in Philadelphia in support of Richard Taylor and William Gatewood (at top of stairs in doorway) following their Nov. 9, 2013 wedding

United Methodist Bishop Peggy Johnson, episcopal leader for the Philadelphia Area, said she has received a complaint against the 36 pastors who officiated at the Nov. 9 same-sex union of two men performed at Arch Street United Methodist Church but added the matter is confidential and will be “prayerfully” considered.

In a statement released by her office in the Eastern Pennsylvania Annual (regional) Conference, Johnson said, "We are following the Disciplinary process as outlined in paragraph 363 of the 2012 Book of Discipline of The United Methodist Church? and are prayerful that a just resolution can be achieved. As United Methodists, we are committed to seeking peace and reconciliation as a model for society. May it be so."

A list of the 36 pastors has not been released and a spokesperson for the group said the pastors were abiding by the bishop’s wishes not to make any statements or speak to the media at this time.

The names of the person or persons filing the complaint also have not been made public.

On Nov. 6, Richard Kevin Taylor and William Robert Gatewood, both longtime members of Arch Street United Methodist Church, were blessed by more than 40 faith leaders at their union.

The Rev. Robin M. Hynicka, senior pastor at Arch Street, said at the time that 36 United Methodist clergy were officiating at the ceremony.

The clergy and lay leadership of Arch Street United Methodist Church made a statement at the ceremony on behalf of the Reconciling United Methodists of Eastern Pennsylvania. Reconciling Ministries Network advocates for the blessing of same-gender marriages and for greater inclusion of gays, lesbians, bisexual and transgender individuals in the life of the church.

“In contrast to The Discipline of The United Methodist Church which prohibits United Methodist clergy from performing same gender weddings, we pronounced that the couple is married in the eyes of God. By this pronouncement, a loving couple will be affirmed spiritually and welcomed fully into the community of faith.”

In addition to celebrating the couple, the pastors said they wanted to stand in solidarity with the Rev. Frank Schaefer, who was facing a church trial at the time for officiating at his son’s same-sex wedding.

Schaefer was found guilty of violating church law during a Nov. 18-19, 2013, trial and had his clergy credentials removed by the Eastern Pennsylvania Board of Ordained Ministry on Dec. 19, 2013. An appeal’s committee of the Northeastern Jurisdiction reinstated his credentials on June 23.

The Rev. Christopher Fisher — who served as counsel for the church, the equivalent of a prosecutor — said he will "be prayerfully examining the appeal ruling to determine if it is in compliance with church law.” He expects to make a decision about whether to appeal the ruling to the United Methodist Church’s Judicial Council on or before July 19.