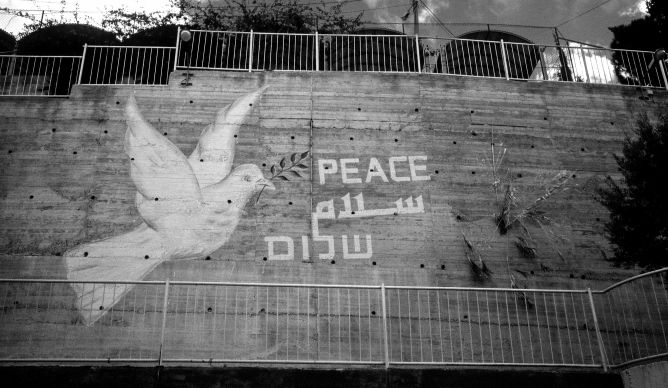 A mural promoting peace in three languages, English, Arabic and Hebrew, adorns a wall outside the Mar Elias Educational Institute in Ibillin, Israel. Two United Methodists are urging people on July 15 to fast and pray for peace in the region.

Sometimes a move toward peace begins with putting down the fork.

As violence escalates between Israeli forces and Hamas, two Texas pastors say their fellow United Methodists can do something in response. They are urging churchgoers to join with Jews and Muslims, who on July 15 plan to fast and pray for peace between Israel and its Palestinian neighbors.

The United Methodist General Conference, the denomination’s top lawmaking assembly and the only body that can speak for the church, has adopted a number of resolutions regarding the Israeli-Palestinian conflict. The following are in the 2012 Book of Resolutions, which include the denomination’s teachings on current social concerns.

The two pastors in the Texas Annual (regional) Conference were inspired by an article in the Jewish Daily Forward by Sigal Samuel. The article reported that the grieving families of murdered Israeli-American teen Naftali Fraenkel and murdered Palestinian teen Mohammed Abu Khdeir are drawing comfort from each other.

“It was a fantastic story of these families transcending these things that we think cannot be transcended,” said the Rev. Ben Trammell, lead pastor of Faith United Methodist Church in Richmond, a Houston suburb. “It resonated with me, with them making the effort to come together and talk about the grief they know.”

The article also reported that another group of Palestinians had visited the Fraenkel family to offer condolences. During the visit, the Palestinians mentioned a joint Jewish-Muslim fast on July 15 to express a desire to end violence in the region.

Trammell this Sunday plans to invite his congregation, which sees about 700 people in worship each Sunday, to join in the fast. He said he hopes the fast might help humanize what for many Americans may seem like remote news stories from half a world away.

“There is an intractable, retributive evil here that keeps playing itself out in a cycle of violence,” Temple said. “Until this cycle can be broken, there is absolutely no possibility of peace.”

But when the disciples faced an intractable problem, Temple noted that Jesus in Matthew 17:21 urged them to fast and pray. This passage does not appear in some newer English Bible translations that use older manuscripts of Matthew.

Nonetheless, the spiritual discipline of abstention is something all three Abrahamic faiths share.

The significance of July 15

And this year, July 15 offers an ideal time for a joint fast, Trammel and Temple said. The date happens to fall on a fast day in both the Jewish and Muslim calendars.

For Muslims, most of July is Ramadan, the holy month that celebrates when Muslims believe God through the angel Gabriel gave Muhammad the teachings of the Quran.

During Ramadan, Muslims are encouraged to refrain from food and drink from sunrise to sunset, restore relationships, be especially generous with others and reread the Quran in its entirety. Because Muslims follow a lunar calendar, Ramadan shifts about 11 days earlier each year in Western calendars.

In the Jewish calendar, July 15 coincides this year with the 17th day of the month of Tammuz or Shiva Asar B’Tammuz. This fast day commemorates calamities experienced by the Jewish people. These include:

Zechariah 8:19 says this and other fast days should “become joyful and glad occasions and happy festivals for Judah. Therefore love truth and peace.”

No question both the people of Israel and Palestinian territories have a great need for peace right now.

Fraenkel, 16, along with Gilad Shaar, 16, and Eyal Yifrach, 19, were three Jewish seminary students, who were abducted and found shot on June 30. The body of Khdeir, 17, was found beaten and burned on July 2, a day after the other young men’s burial.

Since the four teens’ deaths, forces in Gaza and Israel have intensified the exchange of rocket fire. The Israeli military said it has called up about 20,000 reservists for a possible ground invasion of Gaza. As of July 10, Palestinian officials reported at least 78 Palestinians had been killed, including 14 age 15 and younger.

The United Methodist  Board of Global Ministries and Ginghamsburg Church in Tipp City, Ohio will hold the “Walking with Palestinian Christians … for Holy Justice and Peace” conference on Aug. 7-8. Workshops will focus on biblical/theological perspectives; pilgrimage and presence; political, economic and social advocacy and actions; and involvement and positions within The United Methodist Church. The deadline to register is July 30..

How best to foster peace between Israelis and Palestinians has long been a contentious topic around the globe, including among United Methodists. But no matter a person’s views of Israeli settlements or other aspects of the region’s political situation, Temple said, everyone can pray and many people can fast.

“The Bible says to pray for peace in Jerusalem,” he said, “and I think we should do that.”

Thomas Kemper, the top executive of the United Methodist Board of Global Ministries, shares that sentiment. The denomination’s mission agency and Ginghamsburg Church, a United Methodist congregation in Tipp City, Ohio, will hold a conference in August on “Walking with Palestinian Christians,”focusing on people who are often caught in the crossfire of the conflict.

“There are so many people of faith invested in peacebuilding in Israel and Palestine,” Kemper said. “When we pray together, we remember that God is bigger than any conflict and paves the way for honest dialogue. The upcoming ‘Walking with Palestinian Christians’ conference will have prayer and worship woven throughout the workshops and plenary session. A day of fasting and prayer is a wonderful way to bring together Muslims, Christians and Jews for a common purpose.”

Trammell has no idea how many people will accept his and Temple’s invitation. But he is hopeful those who do will make a difference.

“We don’t have a big movement. We won’t have a parade,” Trammell said. “We’re just asking folks to fast on July 15 to help the world look more like what God wants it to be.”