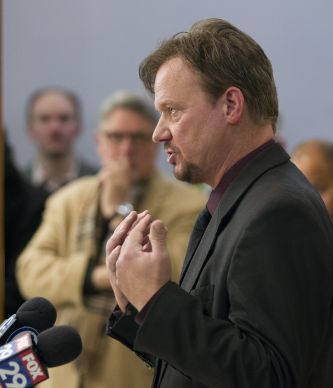 An appeal has been filed with the United Methodist Judicial Council to the June 23 decision to reinstate the Rev. Frank Schaefer’s ordination credentials. Judicial Council will meet in October.

The Rev. Christopher L. Fisher, who was counsel for the church in the trial of the Rev. Frank Schaefer, is appealing to The United Methodist Church’s top court to overturn last month’s reinstatement of Schaefer’s ordination credentials.

The denomination’s Judicial Council will next meet in October, and the appeal is on the docket.

"As counsel for the church of the Eastern Pennsylvania Conference, I have determined to appeal the June 24 decision of the NEJ Committee on Appeals in the case of Rev. Frank Schaefer to the Judicial Council.  After review of the appeals court decision, I believe it was based on several errors of Church law.  The Judicial Council will be requested to correct these errors of law and to reverse the lower court's ruling.  We are asking the church to keep this difficult matter in prayer," Fisher said.   His brief to the Judicial Council argues that the decision to reinstate Schaefer conflicts with the Book of Discipline, the denomination's law book, and earlier Judicial Court decisions. Fisher also says the committee on appeals "wrongly crafted its own penalty" for Schaefer rather than remanding back to the lower church court. In his appeal, Fisher also requested that the Judicial Council hear oral arguments in the case.

Schaefer told United Methodist News Service he knew an appeal “was a real possibility … and knowing how politicized my case has become I sort of expected it to happen.”

“I am just hoping and praying the Judicial Council will really keep in mind our LGBQT community first because harm is still being done to them,” he said. “I am hoping they will really review this case also in light of the fact that we are a diverse church and that we have many LGBQT members in our churches. I am hoping that their decision will really reflect that.”

The Rev. Scott Campbell, counsel for Schaefer, said the appeal is disappointing.

“While the defense team for the Rev. Schaefer is disappointed that the counsel for the Eastern Pennsylvania Conference has failed to accept the clear and compelling decision of the Northeastern Jurisdictional Committee on Appeals, we welcome this opportunity to have the Judicial Council, the highest court in our church, ratify what the Appeals Committee decided.  We are confident that the Judicial Council will uphold the careful work of the lower court,” he said.

Schaefer’s ministerial credentials were reinstated by the denomination’s Northeastern Jurisdictional Committee on Appeals on June 23. The decision also ordered the Eastern Pennsylvania Annual (regional) Conference to compensate Schaefer for all lost salary and benefits dating from Dec. 19, 2013.

The nine-member panel unanimously ruled the lower church court’s penalty against Schaefer was “illegal.” An eight-member majority of the committee supported a penalty modification to the 30-day suspension Schaefer had already undergone.

In the penalty stage of the trial, the court suspended Schaefer from his ministerial duties for 30 days and declared that if he could not “uphold the Discipline in its entirety” at the end of the suspension, he would surrender his credentials. He refused to do that, and on Dec. 19, the Eastern Pennsylvania Conference Board of Ordained Ministry asked him to give up his credentials.

After the June 23 ruling, Bishop Minerva Carcaño announced Schaefer’s new appointment to Isla Vista Student Ministry in Santa Barbara, California, with the blessings of his previous bishop in the Eastern Pennsylvania Annual (regional) Conference. Schaefer will be responsible for reaching out to the large college community that “lives, studies and works at the doorsteps of the church,” said Carcaño, who leads the denomination’s California-Pacific Conference.

“Rev. Schaefer has much to teach us about what it means to love the children God gives us who happen to be gay. I pray that we will make space for him and his family in our lives and in our hearts as he comes to labor among us,” she said.