A lens-eye view of the civil rights struggle

A lens-eye view of the civil rights struggle 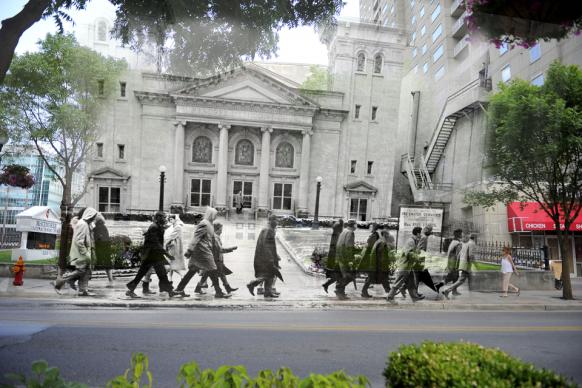 While newspaper photographers were capturing history on the streets of Nashville in the 1950s and ’60s, Larry McCormack was a baby toddling around in his family home.

Fast forward to 2014 and McCormack is the one snapping photos of life in this modern Southern city, providing what will become another picture of Nashville’s history in 50 years.

Using black and white photos from the past, McCormack, a United Methodist, gives his own twist on history by combining them with color photos of the same settings today.

Surveying the streets of Nashville, he sees the blood spilled by men and women of color and courage who were trying to find equality in an unjust world.

“There was a time when people of color were looked at like they didn’t belong as part of Nashville, and that hurts my heart because we are all God’s children,” McCormack said. “I think that is changing, but I don’t want people to ever forget where we came from. … There is still a tendency to do that.”

McCormack hopes the visual mingling of the past with the present in his photographs give viewers a sense of walking into history, just as he is walking in the footsteps of former photographers in a collection of photos he calls “Civil Rights: On These Streets.”

Born in Nashville in 1959, McCormick said he wasn’t really aware of the history of the civil rights struggles in his hometown during his childhood.

After graduating from Middle Tennessee State University, he worked at several small newspapers before spending 15 years with the Nashville Banner until that afternoon newspaper closed in 1998. He now works at the Tennessean, the city’s remaining daily newspaper, which has been recording history under different owners and names since 1812.

The civil rights struggle became more real to him in 1993 when he was working on an exhibit of Banner photos from that era.

“I came to Nashville not to bring inspiration, but to gain inspiration from the great movement that has taken place in this community.” — The Rev. Martin Luther King. Jr., at a rally at Fisk University in 1960.

That exhibit is part of the permanent Civil Rights Collection at the downtown Nashville Public Library, which holds the copyrights for all the archival photos and stories from the Nashville Banner and historic photos from the Tennessean. He became so familiar with the photos that looking around the room makes him smile. “These (photos) are like my babies.”

When the Tennessean began working on a special series for the 50th anniversary of Martin Luther King Jr.’s, “I Have a Dream” speech in 2013, McCormack wanted to find a way to contribute but he wasn’t on the team chosen to work on the project.

He found his place when he created his collection of archival photos layered over color photos of the same sites today. McCormack was inspired by a San Francisco photographer who does something similar using archival World War II photos.

“There is one photo of John Lewis, now Rep. John Lewis, taken by Jimmy Ellis in 1962. He is being arrested and taken away because he wouldn’t move from the entrance of a hamburger joint in the same square we are in right now,” he explained. “There is a paddy wagon in the background, and he is being carried by two police officers and he is being hauled off to jail —that’s probably my favorite.

“You really feel like you were there. People can come out of this room (in the library), walk down stairs, walk through those front doors and they are smacked in the face if they have seen that image — it is right there in front of them. They are literally standing on the spot where that happened.”

The collection takes a lot of time and research. McCormack walks the streets looking for the same landmarks and the same perspective from the archival photos.

THE MOVEMENT IN NASHVILLE

For instance, there is a photo taken from the window of the courthouse looking down on young blacks holding a peaceful demonstration. To find that same spot, McCormack enlisted the help of a security guard who let him walk from floor to floor until he found the right window.

Pointing to the photo he said, “This is taken from a judge’s window back in her private office.”

“I won’t always have these toys to play with — the Tennessean archives — to pull out and experiment with, but I do today.”

He feels blessed to have an outlet for his creativity and he thanks God for his talents.

“I am very visual and I know I am not speaking to everyone when I do these photographs, but I am going to touch somebody with them,” he said.

McCormack is a member of Gladeville United Methodist Church where he has led a Sunday school class for several years. “I’ve also led and been on more committees within the church and conference than I care to recount,” he said. “My wife Lisa and I were the youth leaders for a number of years until our son was born in 1991.”

McCormack and his Sunday school class are reading the Bible together chapter by chapter.

McCormack said his job as a newspaper photographer allows him to influence and inform his community and that is a responsibility he takes seriously.

“I am in a business that basically criticizes everyone, but I find it hard to find fault even with our government until I can fix the guy I look at in the mirror every day.”

McCormack feels in many ways he is on the same journey as Nashville. The black-and-white photos he works with are from a different time but he wants to learn from that history.

“I don’t feel a sense of shame, they were growing just like I am growing,” he explained. “But I won’t grow if I stop learning.”