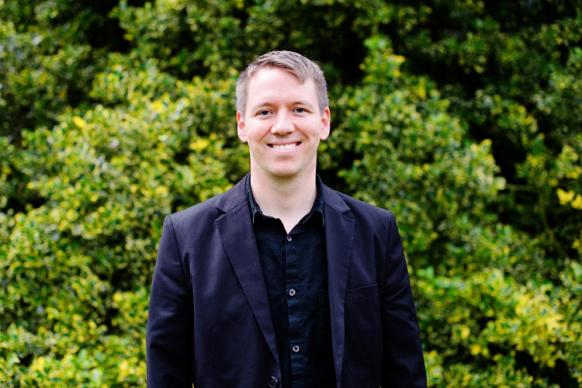 John Wesley’s time in the colony of Georgia wasn’t quite the failure that some scholars of early Methodism believe.

Hammond, 36, grew up in Kansas, studied in California and moved to England in 2003 to do his doctorate at the University of Manchester. As a young Wesleyan studies scholar, he was attracted by the school’s John Rylands Library, specifically its Methodist Archives.

He has stayed on in England, in part because his wife entered medical school there. He’s currently director of the Manchester Wesley Research Centre and senior lecturer in church history at Nazarene Theological College.

For this interview about his book on Methodism’s founder, Hammond answered questions from United Methodist News Service by email.

Yours is the first book-length study of John Wesley’s time in the colony of Georgia. Why this subject?

I developed an interest in both history and theology in my undergraduate and MA studies at Point Loma Nazarene University and Fuller Theological Seminary. Cross-cultural experiences have played an important role in the strengthening of my Christian faith. Studying John Wesley’s experience in Georgia provided a fascinating case study to combine my interests in history, theology and missionary work.

“Primitive Christianity” was a term commonly used in Wesley’s day to refer to early Christianity. “Restoring Primitive Christianity” is the subtitle because I argue that Wesley’s passion for restoring the doctrine, discipline and practice of the early church in the primitive Georgia wilderness was his primary reason for going to Georgia and for his ministerial practice in the colony. Wesley was one of a number of Anglicans who believed that the early church provided a model for the revival of the church.

What has been the prevailing scholarly view of Wesley’s time in Georgia?

In terms of overall judgement of Wesley’s ministry, the dominant view (at least until recent decades) has been that it was a failure. Some biographers have called it a “preface to victory” to highlight that it was chiefly important for leading Wesley to his evangelical conversion soon after returning to England from the colony.

Why, after researching and thinking about the question, do you think that’s wrong?

I think there is evidence for both “success” and “failure” in Wesley’s writings and those of his contemporaries. The majority of reflections in Wesley’s first published Journal, particularly relating to the period between the end of his Georgia mission and evangelical conversion a few months later, suggest “failure.” However, most of his comments later in life were more positive on his ministry in Georgia. My conclusion is that studying Wesley’s experience in Georgia in context calls for a nuanced view on his “success” or “failure.”

How did Wesley try to put primitive Christianity into action in Georgia?

Wesley tried comprehensively to put primitive Christianity into action in Georgia. This can perhaps be most clearly observed in his doctrine and practice of the sacraments of baptism and communion. I also discuss his application of primitive Christianity relating to subjects such as ascetical devotional discipline, conduct in leading public worship, hymns, episcopacy, prayer book revision, confession, penance, deaconesses, religious societies and mission to the Indians.

Wesley encountered controversy over his ministry in Savannah and elsewhere in Georgia. Please briefly explain the Sophia Williamson episode and your conclusions about it.

Sophia Hopkey was a young woman whom John Wesley fell in love with. They became close friends as Wesley tutored her in Christian doctrine and practice — what he called “practical divinity.” Wesley admired her simplicity and devotion, which he believed mirrored that of the primitive Christians. He contemplated proposing marriage to her but hesitated for two reasons: First, he had come to Georgia to be a missionary to the Indians and felt that this needed to remain his main priority; second, he was attracted to the practice of clerical celibacy in the early church.

Sophia tired of waiting and quickly married another man. Wesley was devastated and believed it led to a rapid decline in her Christian devotion. As a result he warned her not to present herself for Holy Communion. When she ignored this warning Wesley refused to administer communion to her. This caused a major dispute in an already socially fragile colony and was a key reason for Wesley’s departure from Georgia. I suggest in the book that the Sophia Williamson episode has often been overemphasized. Wesley had similar intimate friendships with other women in Georgia, and the Williamson episode was only one of several reasons why some colonists opposed his ministry.

Some see Wesley’s “strangely warmed” experience at Aldersgate, occurring some months after he’d returned from Georgia, as his real beginning as an evangelical minister. Given your understanding of his time in Georgia, what do you think?

My purpose in trying to further our knowledge of Wesley’s time in Georgia is not to thereby diminish the undoubted importance of his Aldersgate experience. Wesley clearly went to Georgia with evangelistic aims, and I discuss the substantial continuity in his theology and ministry post-Georgia in the conclusion to the book; however, his “strangely warmed” experience was crucial to him becoming a leader of the emerging Evangelical Revival. Wesley believed that his evangelical conversion at Aldersgate enabled him truly to become an evangelical minister.

As Wesley’s life went on, did he change how he saw his time in Georgia, and what did it finally mean to him?

In writing a history of the Methodist movement, he claimed that it was where the second rise of Methodism took place. Most spectacularly, he asserted that his ministry in Georgia played a role in the American Great Awakening. Unfortunately, he left no extended reflection on what his time in Georgia ultimately meant to him.

Do you find it interesting and important that Wesley never returned to America?

Yes, it is interesting. He contemplated going back to Georgia for a few months after he returned to England and considered travelling to America in the 1770s to provide leadership to the emerging Methodist movement. It is significant that he never returned to America in that if he had returned American Methodism may have developed differently than it did.

Is “John Wesley” a name broadly known in England now, or has his fame receded with the decline of churchgoing there?

I don’t think it could be said that his name is broadly known, but the same would be true for other major figures in 18th century England. Decline in churchgoing has probably led to fewer people knowing about Wesley. On the other hand, Wesley is probably now appreciated more by Anglicans and Christians generally (especially by leaders and theologians) than he often has been in the past. Interest in Wesley in academic circles has increased in recent years and resulted in significant publications on Wesley by major academic publishers.