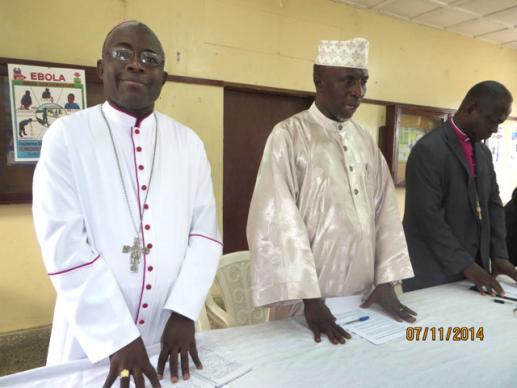 Sierra Leone's two main faith groups — Christians and Muslims — have formed an alliance to join the fight against Ebola amid increasing infection and death rates from the epidemic in the country.

The Religious Leaders Task Force on Ebola, chaired by United Methodist Bishop John K. Yambasu, was launched July 11 in Freetown and the group’s first regional training took place July 16 in Bo. A solidarity visit to Kailahun, the district that has suffered the most from the outbreak since May, is planned.

The United Methodist Health Center in Manjama, near Bo City, was quarantined July 4 following the deaths of two Ebola-infected children who were found at the center.

Latest figures from Sierra Leone’s health ministry, often referred to as “conservative,” show more than 100 deaths among a population of six million, with most occurring in the easterm Kenema and Kailahun districts through which the epidemic entered the country from neighbouring Guinea.

"We at the Ministry of Health and Sanitation have made a lot of headway ... but we still have lots of challenges that is why we have now turned to the religious leaders to put their blessing in our effort to control this Ebola outbreak. The information we are passing on to people is not enough," he told participants during the opening session of the July 16 training.

The training of religious leaders and health workers in the southeast region of the country also will be replicated in the north and the Western Area. Pastors and imams are expected to take the knowledge from the training back to their respective congregations and must preach about Ebola during every prayer session.

"We at the United Methodist Church want to join the fight against Ebola but have discovered that we cannot do it alone considering the rapid way the disease is eating into the fabric of our society," Yambasu said.

In the coming weeks and months, the task force will:

The United Methodist Committee on Relief has provided funding for the initial trainings and materials, but the task force will need additional funding in the coming months to actualize its goals, the bishop said.

At the Bo training, Yambasu appealed to all to stop spreading rumors about Ebola, especially those linking the epidemic to politics, which he believes might just derail the nation's combined effort in fighting the deadly disease.

Religious leaders played a significant role in bringing the country's civil strife to an end and also were pivotal in the reconciliation process, Yambasu noted, and he believes they can do more now in the face of a common enemy called Ebola.

"We have realized that health workers are working under very difficult and challenging conditions,” he said. "The purpose of our intervention is to bring an end to that.  If our health workers continue to die, we all are at risk of dying."

As the death toll mounts, news emerged last week from eastern Sierra Leone that four nurses have died of Ebola at the Kenema Government Hospital where the Ebola isolation ward is located and that more health workers were being treated for Ebola.

Dr. Sheik Umar Khan, the 39-year-old virologist who has been at the forefront of the Ebola fight at the Kenema Ebola Isolation Center has himself caught the virus and is now being treated in Kailahun by Medecins Sans Frontieres  personnel.  Health Minister Miatta Kargbo is quoted as calling Dr. Khan a 'national hero' and pledged to do everything in her power to save his life.

In Liberia, a doctor who treated Ebola patients has died from the disease and an American doctor and a missionary working in Monrovia have been infected.

Liberia’s president, Ellen Johnson Sirleaf, a United Methodist, has ordered the closing of border crossings and is restricting public gatherings and invoking quarantines to try to stop the epidemic, it was reported July 28.

Barbara Jurge, field coordinator for Medecins Sans Frontieres, told those at the Bo training that the most painful agony people are now going through is that of fear.

"We are receiving 40 percent less patients hospitalized in our hospital and 75 percent less of children now being brought to the hospitals," she said.

It is rainy season in Sierra Leone —normally the peak period of malaria infection in the country. But because of the fear of Ebola, Jurge said, parents are keeping their malaria-sick children at home, which is an even bigger fear.

Alhaji Mustapha Koker, Chief Imam, Bo District, warned against complacency, insisting instead that everybody must put their strength in preventive measures.

Part of the problem, noted Sheik Ibrahim K. Tsombie from Kenema, said was that government health officials, in their attempt to respond to the outbreak, sent out conflicting and often counterproductive information at the initial stages of the outbreak.

Such misinformation, he said, created fear and an atmosphere of hopelessness and denial. "Why would you want me to come to the health facility for when I have been told there is no cure?" he asked.

The task force is also paying a solidarity visit to Kailahun, the district that has suffered the most from the outbreak since May.

*Jusu is a communicator for The United Methodist Church in Sierra Leone.