‘A dream for peace on the Korean Peninsula’

‘A dream for peace on the Korean Peninsula’ 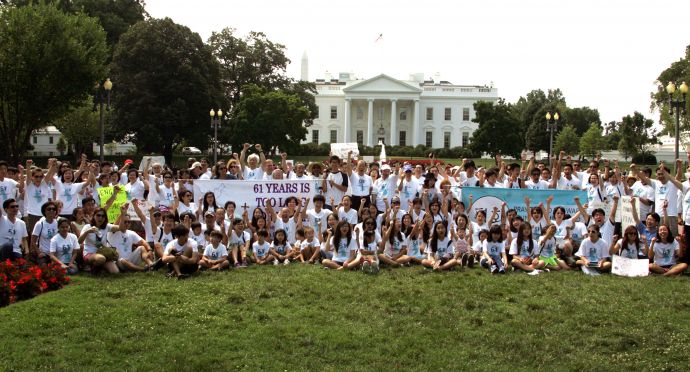 Following the Korean Peace March on July 26, 200 gather in front of the White House.

“Peace for Korea Now!” shouted about 200 people, primarily Korean or Korean Americans, as they marched the mile from Foundry United Methodist Church to Lafayette Park in front of the White House on Saturday.

Standing behind a banner that read: Pray to End the War; Reunite Families; and Bring Peace to Korea, the Rev. We Chang of the United Methodist New England Annual (regional) Conferenceechoed the Rev. Martin Luther King Jr. as he declared, “We too have a dream, a dream for peace on the Korean Peninsula.”

The July 26 “Korea Peace March and Vigil” was the culmination of a two-day event timed to coincide with the 61st anniversary of the signing of the Armistice Agreement that ended the Korean War on July 27, 1953.

Decades of division in Korea, have “been too long,” noted the Rev. Chongho James Kim, North Georgia Conference, who said he was overwhelmed to see all generations participating in the peace march. “I pray that all this effort will bring the reunification of Korea closer.”

The U.S. needs to take a lead in forging peace between North and South Korea, said June Kim, another United Methodist participant. Korea is a country that’s still divided when other Cold War-era rifts have healed, she pointed out. “As a Korean-American, that really weighs heavily on my heart, especially for the separated families that haven’t seen each other for over 61 years,” she said.

“For us, this march is about being one in Christ, being one people, one land and truly having peace and reconciliation on the Korean Peninsula as a part of our Christian witness.”

The day before the march, about 60 people participated in an international ecumenical roundtable held at the historic Foundry church. “We gather to witness the human cost of the unended Korean War, walk and pray together to raise our voice to end the war and establish peace for the people of two Koreas and the world,” said the Rev. Kyeong-Ah Woo, a member of the Korea Peace Forum, March and Vigil Team, a sponsor of the event.

United Methodist Bishop Mary Ann Swenson read the prayer during the July 25-26 ecumenical gathering in Washington and noted that all 345 member denominations of the World Council of Churches have been asked to join in that prayer every year “until peace happens.”

Swenson, who also serves as vice moderator of the World Council of Churches, introduced a “Statement on Peace and Reunification of the Korean Peninsula,” approved at the WCC Assembly in Busan, South Korea, last year.

The statement declared, “We are convinced that it is the right time to begin a new process towards a comprehensive peace treaty that will replace the 1953 Armistice Agreement and secure just and peaceful relations among nations in the region while normalizing relations between North and South, and facilitating Korean reunification.”

The 2012 United Methodist General Conference, the denomination’s top legislative body, called all United Methodists to organize “a March for Peace for the Korean Peninsula.”

The Washington gathering was in part a response to that call, noted Wisconsin Area Bishop Hee-Soo Jungin his welcoming remarks.

“But for most of us, it is deeper than the words of a resolution, it is a deep sense of standing for what is right and just,” Jung said. “I am grateful for the presence of all of you and for all you do to help the cause of bringing peace and reconciliation for the people of Korea.

“We gather here because of our desire for peace, not only for Korea, but for the people of Palestine and Israel and the Ukraine, and all places where hatred and fear find expression in war and violence.”

A war that never ended

In a keynote address, Christine Ahn, executive director of the Korea Policy Institute, gave the history and background of the war and the armistice that ended it and suggested steps to improve the future for all Koreans.

The Korean War, she explained, though relatively short (1950-1953), was exceptionally bloody. Approximately10 million Korean families are still separated due to the division of Korea. Nearly 5 million people died in the war, including 40,000 Americans. More than half of those killed — about 10 percent of Korea’s prewar population — were civilians. To put that in perpective, scholars estimatebetween 650,000 and 850,000 men died in the U.S. Civil War, the United States' deadliest conflict.

The temporary “trilateral” armistice that effectively ended the conflict among Communist and non-Communist forces, Ahn said, was signed by China, the United States and North Korea, but South Korea did not sign it. The signing of a peace treaty, expected before the end of that year, never occurred. “Sixty-one years later and we’re still waiting,” she said.

A new border between the Koreas was established by the temporary agreement, close to the previous one established at the end of World War II, at the 38th parallel. The border divided the country into the Soviet (North Korea) and U.S. (South Korea) zones of occupation. It also created the Korean Demilitarized Zone (DMZ), a 2.5-mile-wide fortified buffer zone between the two Koreas.

Korean concerns for the north

A South Korean delegation at the gathering was led by the Rev. Hun Jung Cho from the Office of Reconciliation and Reunification of the National Council of Churches of Korea.

He told of visits to the churches in North Korea and the difficult circumstances in the country. “My heart is heavy from the needs of children suffering in North Korea,” he said. “In South Korea, we have so much food left over, it is going to waste.”

Though some families from the south are able to visit relatives in the north, it is very difficult. Only 170 family members can visit North Korea every two years, Cho said. “The church in the USA must persuade the government (to change policies).”

Jung pointed out several steps all churches can take. “Christian awareness is crucial,” he said.

In addition to witness and persistent prayer, churches can advocate to Congress, the Obama Administration and the U.S. State Department to work toward a permanent treaty and lift sanctions on North Korea “that are such a hardship on the people there,” the bishop said.

Following a Korean meal, provided by the Korean United Methodist Church of Greater Washington in McLean, Virginia, the Foundry sanctuary was filled for a viewing of “Memory of Forgotten War,” co-produced by Professor Ramsey Lim, who spoke. The film shows four separated families telling their personal stories of the pains and sorrows they suffer because of family separations.

United Methodist groups among the gathering’s ecumenical sponsors included the Board of Church and Society, Board of Global Ministries, Korean Ministry Plan, United Methodist Women and the Committee on Reunification of Korean American Assembly.

Linda Worthington is a retired writer for the Baltimore-Washington Conference. Lee is director of Korean resources for United Methodist Communications.