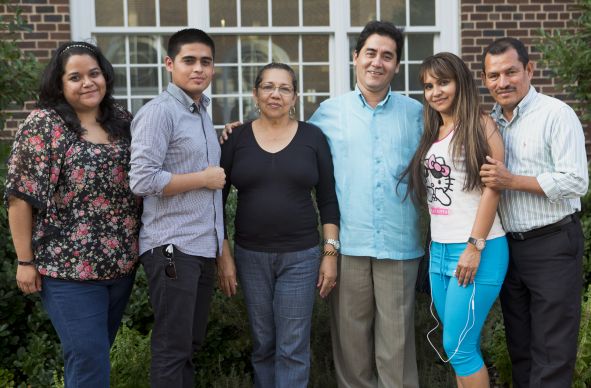 This summer, some Methodist pastors from Colombia and Mexico have engaged in distance learning the old-fashioned way — traveling to Dallas for classes at Southern Methodist University’s Perkins School of Theology.

They’ve been studying everything from the Hebrew Bible to pastoral leadership, while also visiting area United Methodist churches, attending Perkins Chapel services and forming friendships within their group and the broader Perkins community.

“It’s a prayer answered by God for me to come here,” said the Rev. Ricardo Aldana Mogollon, who leads a growing 80-member Methodist congregation in Cartagena, Colombia.

The pastors — two Mexicans and four Colombians, ranging in age from 23 to 60 — are part of the Course of Study School that occurs at Perkins over the month of July.

Course of Study School is a United Methodist Board of Higher Education and Ministry program that offers a basic theological education to licensed local pastors, following guidelines laid out in the denomination’s Book of Discipline.

Perkins and Garrett-Evangelical Theological Seminary are the two United Methodist seminaries that offer Course of Study School in Spanish as well as English. Perkins has taken the additional step of bringing in students from Mexico and Colombia.

Iris Zamorano is attending the latter while leading two rural churches about two hours away. She was glad to get the nod from her bishop to spend four weeks at Perkins.

She said her month here has given her a welcome grounding in the global, multicultural nature of the church, encountered through faculty, students and the diverse Dallas community.

That sentiment was echoed by Rosendo Garcia Jaimes, a student at Juan Wesley Seminary who will be getting his first pastoral appointment immediately upon his return to Mexico.

The Colombian Methodist Church dates only to 1996, and the denomination has about 5,000 members.

“In Colombia, it’s an emerging church, very new,” said the Rev. Danilo Diaz Rivas, another of the pastors at Perkins. “We are the ones who are making it known to others.”

Colombia has no Methodist seminary, and the pastors, including Diaz, tend to come from other branches of Christianity.

Diaz is a former Pentecostal who, as a Methodist, is ministering to the indigenous Zenú tribe in Colombia. He appreciates Methodism’s emphasis on social justice, which he said the Zenú badly need, given threats to their economic independence and culture.

The Rev. Denis Marquez Anguila faced questions from her Pentecostal family when she became a Methodist. She now leads two small Methodist churches in Medellin, and said that roughly half of her family members have followed her into the denomination.

She said the pastoral leadership ideas and books she’s encountered at Perkins will be of considerable practical help. Aldana agreed.

“I can see the mistakes I’ve been making,” he said.

The Methodist Church of Mexico and Perkins have long ties, and Perkins underwrites the cost of bringing small numbers of Mexican pastors to Course of Study School. The Board of Higher Education and Ministry has a grant program that pays for the Colombian students to come to Perkins.

There’s a consensus that Perkins can help nurture Methodism in Colombia through Course of Study School in Dallas, and possibly through sending professors to Colombia to reach even more pastors, said Philip Wingeier-Rayo, director of Perkins’ Mexican American and Hispanic-Latino/a Church Ministries program and its United Methodist Regional Course of Study School for Local Pastors.

“Our connectional system leads to an infinite number of possibilities,” he said of Perkins and The United Methodist Church.

The pastors acknowledge taking breaks to check on World Cup matches. Some found time to play a little soccer themselves on the lawn outside Prothro Hall.

The pastors said the chance to be physically away from church responsibilities, focused on studies for a month, had been renewing. And they looked forward to applying what they’d learn, once home.

“My vision,” Aldana said, “has been expanded.”