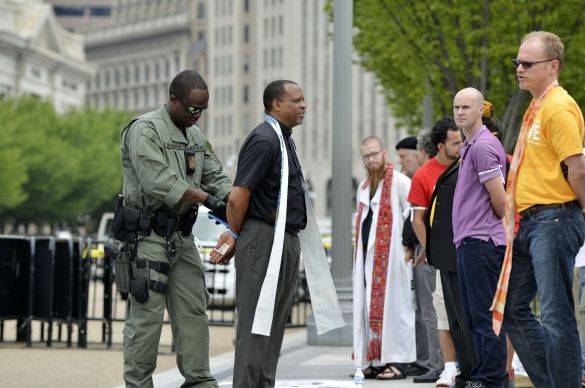 Photo by Jay Mallin, United Methodist Board of Church and Society.

The Rev. John McCullough, a United Methodist and president and CEO of Church World Service, was among faith leaders arrested in immigration deportation protest.

Luis Orellana, a United Methodist from Des Moines, Iowa, has seen people disappear. It’s the result of people he knows being deported against their will, often breaking apart marriages, families and whole neighborhoods.

He was in Washington July 31, to join with hundreds of protesters calling on President Barack Obama to end what they view as inhumane immigration enforcement policies.

“I have kids that are about the same age as some of those kids crossing the border right now,” Orellana said. “I have cousins and uncles that have been deported, and I know what it is like to be on the other side of the fence. I also know what it’s like to accomplish something in this country, and I’m very grateful.”

All told, 112 faith leaders, including 45 United Methodists, and advocates  were arrested in front of the White House during the demonstration that demanded more humane immigration and deportation policies from the Obama Administration. United Methodist bishops Minerva Carcaño of the Los Angeles Area and Jack Meadors, retired, were among those arrested.

The day started with prayer for more than 100 faith leaders, including United Methodists, and immigrant activists who had a strong message for President Barack Obama: Save the children, no more deportations.

Under warm, sunny skies, protesters marched from Lafayette Park to the fence line of the White House, demanding an end to the massive deportations President Obama had overseen during his time in office. Reports indicate that about 1,100 people are deported from the United States every day.

One by one, they were arrested by U.S. Park Police and loaded into waiting buses and vans for their act of civil disobedience.Those arrested were expected to be released after paying a fine.

Support from across the U.S.

Orellana and 11 other United Methodists from Iowa drove 22 hours one way to get to Washington, all to lend their voices to the cause.

Kaija Carter, 17, part of the Iowa group, was at her very first demonstration. She has witnessed friends and family being deported.

“This country was built on the whole mindset that a person could come for a new, fresh start, a new beginning” she said. “It’s angering when people are deported all the time and nothing is being done to change it.”

Because she is a minor, Carter couldn’t join the others in being arrested. But that doesn’t mean she’s not passionate about the issue.

“This is just the beginning of my social justice work and activism,” she said.

Janelle Mueller, from Trinity Las Americas United Methodist Church in Des Moines, works with children at a social service agency within the church. She has watched for the last 15 to 20 years as families have been torn apart by deportation.

“When children lose their parents, uncles and aunts, it gets very tiring,” she said. “Our ancestors did not start out here. There is no reason why people can’t start out here today.”

Being a moral voice

The United Methodist Church recognizes all people, “regardless of country of origin,” as members of God’s family. In its Social Principles, the church states that all people have the right “to equal opportunities for employment, access to housing, health care, education, and freedom from social discrimination.”

“We are here because we are not hearing a moral voice coming from the White House or Congress,” said Bishop Carcaño at a rally before the act of civil disobedience. “It is time for justice in this country; it is time for the ceasing of the deportations of undocumented immigrants that leave families destroyed, that affect our communities, that undermine the ministries of our congregations.”

In the current immigration crisis — with children from Honduras, Nicaragua and other Central American countries pouring over the border from Mexico to the United States — Carcaño stressed that “we must not allow this government to deport these unaccompanied children, sending them back to the possibility of violence upon their own lives: the violence of poverty, of gangs, of gang cartels. Are we not a nation of justice? The shame is that we are not living that justice at the moment.

The Rev. Susan Henry-Crowe, top executive of the United Board of Church and Society, was at the rally, but was not one of the people arrested. She was there, she said, to support the work of the church in its efforts to stop deportations.

“Our denomination supports open borders,” she said. “We’re also concerned about addressing the root-causes of immigration: violence, poverty, hunger. We see that particularly with the children at the border right now.”

Henry-Crowe said that her agency would be posting resources for United Methodists to use on this issue on its website.

“Certainly, we can pray and help others understand the issue,” she said. She also urged people to support Justice For Our Neighbors, a church-based legal clinic that is seeking to offer support and assistance to some of the children who have recently crossed in to the United States.

“There is no other contemporary political issue that is so frequently and consistently addressed in the Bible as immigration,” said Ross. “We’re avoiding the subject like a three-year old avoids cracks in a sidewalk. We need to preach that our faith requires us to reach out to the foreigners among us.”

Northaven United Methodist Church, Folkerth said, is a big supporter of Christ’s Foundry. He accompanied Ross to Washington not only to attend the rally, but also to meet with lawmakers on Capitol Hill.

“We have a mission in Guatamala,” he said of his church, “and a sister church relationship with a church in El Salvador. We’ve seen the rise of violence in those countries, and we’re not surprised at the increase of adults and children coming to the United States.”

Folkerth called for an increase of compassion.

See what others were saying about the July 31 protest on RethinkChurch.

Alsgaard is managing editor of the UMConnection in the United Methodist Baltimore-Washington Annual (regional) Conference.