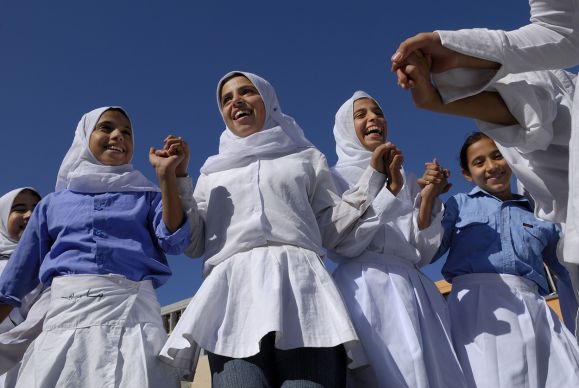 Girls exercise in the physical education class at Al-Zaytoon School, located in the Jabalyia Refugee Camp in the war-torn Gaza Strip, in 2006.

The deadly month-long conflict in Gaza has added a new and more urgent dimension to a previously scheduled denominational forum on partnership and peacemaking with Palestinian Christians.

The two-day Walking with Palestinian Christians Conference starts Thursday at Ginghamsburg United Methodist Church in Tipp City, Ohio, sponsored by the United Methodist Board of Global Ministries. Some 250 participants were expected.

A 72-hour ceasefire of the armed conflict between Israel and Hamas began Aug. 5. An estimated 1,800 Palestinians and 67 Israelis have been killed so far, including more than 300 children.

Recognizing the suffering and pain experienced by all sides of the conflict makes the work of the conference “even more urgent,” said Thomas Kemper, top executive for the Board of Global Ministries.

“We will spend even more time in prayer and discernment,” he said.

Through donations to its International Disaster Response fund, the United Methodist Committee on Relief also is responding with humanitarian assistance in Gaza, where more than half of the population of 1.8 million is under 18 years old.

The agency provided grants to a partner there, American Near East Refugee Aid, which has been distributing food parcels, hygiene kits and water to displaced Gaza families, including those who sought refuge at a church and a nearby school that are not receiving supplies from the United Nations.

The United Methodist Church has decades-long ties to the Palestinian Christian community. Those relationships are reflected at the conference, where participants will meet with ecumenical partners and learn more about the realities of their life in Israel/Palestine.

For David Wildman, who has visited the region many times in his role as the Board of Global Ministries executive secretary for human rights and racial justice, strengthening these relationships “is even more important now. The tragedy of Gaza is a human tragedy, it’s not religious.”

Among the featured Palestinian guests are Zoughbi Zoughbi, founder and director of the Wi’am Palestinian Conflict Resolution Center in Bethlehem; Grace Al-Zoughbi, his niece, head of the biblical studies department at Bethlehem Bible College; the Rev. Alex Awad, a United Methodist missionary, dean of students at Bethlehem Bible College and pastor of East Jerusalem Baptist Church and Nora Carml, coordinator for Kairos Palestine.

The Kairos Palestine document asks the international community to support the Palestinian people and work for a just peace in the region.That document, created by Palestinian Christian leadership in December 2009, should be viewed as a tool to promote “the only path for just and lasting peace for all,” Wildman said.

Advocating for peace in Israel/Palestine has been a longtime concern of the World Methodist Council and its top executive, The Rev. Ivan Abrahams, is a conference participant.

In the August edition of his “First Friday” newsletter, Abrahams noted that the Gaza conflict had left him “deeply saddened by the choices made by those in positions of power and authority.

“I know that tears and outrage alone will not stop the conflict,” he writes. “We need a commitment from all on the ground to stop the violence.”

Armed conflict and the “intolerable suffering” it has inflicted on civilians “can do nothing to promote a just and sustainable peace for Israelis and Palestinians,” the World Council of Churches has said as it called for the resumption of direct peace talks.

“What’s really needed is good relationships that come through tough negotiating,” he said. “The actual risk of a massive human catastrophe is still before us.”