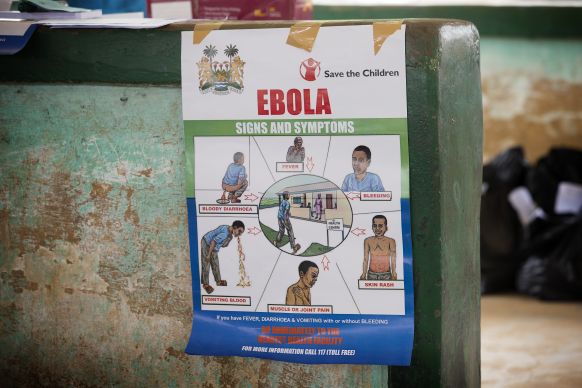 An educational poster about the dangers of the Ebola virus hangs in the community center at the Jaiama Bongor Chiefdom, outside Bo, Sierra Leone. The World Health Organization has declared the Ebola outbreak in West Africa an international health emergency.

With the Ebola outbreak in West Africa declared an international health emergency, United Methodist church leaders in Liberia are educating people about prevention, diagnosis and treatment of the disease.

Above all they are reminding Liberians that Jesus Christ is a healer.

The World Health Organization declared the Ebola outbreak in West Africa an international health emergency. This breakout is the worst in the four-decade history of tracking the disease, the U.N. health agency said.

“This crisis illustrates the strategic importance of communications. The lack of clear information at the outset of the crisis is now compounding the tragedy as misinformation and fear increase,” said the Rev. Larry Hollon, top executive of United Methodist Communications.

“In circumstances such as this crisis, support for helping build the capacity to communicate effectively is urgent and life-saving. Communication is aid,” he said.

The United Methodist Committee on Relief, the denomination’s humanitarian relief arm, has sent $87,000 in grants to the countries affected and stands ready to fund additional projects.

The Indiana Annual (regional) Conference has sent $10,000 to Sierra Leone.

Church leaders in Liberia are also deploying young people with megaphones to more remote locations to reach people who are illiterate or speak different languages. This method was effective in getting out messages during the civil war that ended in 2003, Wilson said.

Wilson reported Ganta United Methodist Hospital is open but not operating at full capacity. He said most of the hospitals and clinics in the country have been abandoned because health care workers are leaving due to fear they will become infected. Health care workers are at the highest risk of catching the disease, which is transmitted by contact with body fluids such as blood, vomit, urine and stools, and possibly through sweat.

Wilson said the ministry of health gave out misinformation in the beginning of the crisis when officials told people the only symptoms were red eyes, vomiting and passing blood.

“There is still a high state of denial among people who might be infected,” he said.

Hollon added that some government and health officials are saying the health care delivery system of the country is collapsing “because people are afraid to go to hospitals, don't believe their loved ones have Ebola, and are self-medicating at home with the result of even greater public health problems.”

“We must accept the fact that the Ebola virus is actually present in Liberia and we must observe every medical advice given by health authorities and institutions.

“Specifically, United Methodist pastors, district superintendents and Sunday school teachers must share the information with their local churches and districts,” he wrote.

The Liberian National Council of Churches is holding a prayer service at Providence Baptist Church on Aug. 8 to conclude three days of fasting and prayer for an end to the outbreak.

United Methodist pastors and church leaders are coming together for training in what the symptoms of Ebola are, how it can spread and what treatments are available, Wilson said. All the messages carry words of hope and the reality of God’s presence.

“We are telling them it is not connected to any traditional taboos that were broken, no superstitions about evil surrounding them,” Wilson said. “Our hope is in Jesus Christ, in knowing he is a healer and will bring Ebola under control.

“Keep us in your prayers, with God all things are possible. It is our hope Ebola will soon be history in the name of Jesus Christ,” Wilson said.

Nurses, doctors save lives but lose their own

A few on the frontlines of Ebola epidemic in Sierra Leone already have made the ultimate sacrifice while helping others. Read More

The church and its partners are confronting an unprecedented surge of the deadly disease, which has affected hundreds of people in Sierra Leone, Guinea and Liberia. Read More

Bishop says Ebola epidemic "nearing disaster" and forces relocation of a United Methodist pastor and the closing of the UMC Mission in Kailahun District. Read More

United Methodist leaders, health care workers and the government are working to inform Sierra Leone about the danger of a deadly Ebola outbreak. Read More

While distributing bed nets in Sierra Leone, The United Methodist Church responds to a new threat to public health. View 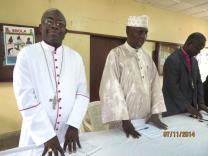 “Most people who died due to Ebola died because of lack of information." The church gets facts, care to those affected by the deadly disease. View