Church responds to another mass shooting

Church responds to another mass shooting 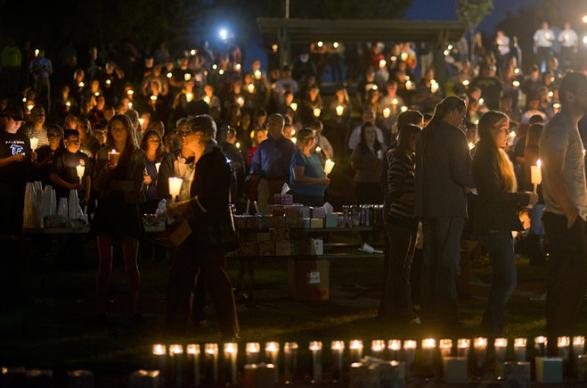 Photo by Cameron Schultz for KPIC.com

An Oct. 1 candlelight vigil in Roseburg, Oregon, memorializes those killed and injured during shootings earlier that day at Umpqua Community College.

United Methodists joined in expressions of distress and grief, as well as calls for prayer, afteranother mass shooting in the United States left 10 people dead and nine injured at Umpqua Community College in southwest Oregon.

“My heart aches, and my prayers go out to all of those who were killed or injured,” said Bishop Grant Hagiya, who oversees the Oregon-Idaho Conference. “Let us call upon the power of God to heal and comfort during this challenging time.”

The Rev. Pamela Meese leads two United Methodist churches near Umpqua Community College, and spent the hours after the Oct. 1 shootings comforting a church member who teaches at the school and was awaiting word on colleagues or students she knew who might have been victims.

“It has been a tragic, tragic day, but we trust God is stronger than any evil,” Meese said late Thursday, Oct. 1.

Meese knew of no one at her churches - Wilbur United Methodist and Sutherlin United Methodist - who was among the victims, though authorities had not released names as of Friday morning, Oct. 2.

RESOURCES FOR COPING WITH VIOLENCE

The United Methodist Church offers many resources for helping people cope with violent events. United Methodist Communications has collected those resources from around the connection, news coverage of how the church is working to respond with peace in a world of violence, and stories about how individuals as well as ministries can make a positive difference even in the most difficult of times.

Roseburg First United Methodist Church, a few miles south of the school, apparently had no church members physically harmed either.

“I’m not aware of anybody in the church that’s currently attending there at school or serving on the faculty and staff, but it’s possible,” said the Rev. Scott Harkness, pastor.

Harkness was traveling Thursday but said he would address the tragedy in a sermon at the Roseburg church on Sunday.

Meese planned to do the same at her churches.

“I’m going to preach a word of hope - that we are Easter people, that evil does not overcome God and good,” she said.

The Rev. Gwen Drake is superintendent of the Crater Lake District of the Oregon-Idaho Conference, which includes the United Methodist churches around Umpqua Community College. She wrote clergy in the district, encouraging them to deal with the tragedy in Sunday services, and suggesting they light a candle for each victim.

"I do not have words to express my grief and anger," Drake said in her letter. "It is impossible to comprehend the why of such an act. It is even more incomprehensible to understand why gun violence has become a re-occuring theme in the news with minimal action to prevent it."

The gunman opened fire in the school’s Snyder Hall on Thursday morning, killing nine people before officers shot and killed him. The Oregonian newspaper and other news organizations identified the gunman as Chris Harper-Mercer, 26.

There were reports that the shooter asked students their religion. CNN quoted the father of one female victim as saying the shooter was singling out Christians, though authorities said they did not know the motive.

“Whether or not that’s true, it doesn’t mean we can turn around then and do harm for having been done harm,” Meese said.

A clearly frustrated President Obama called again for tougher gun control, noting the frequency of mass shootings in the United States, including the killing of nine people at Emanuel African Methodist Episcopal Church in Charleston, South Carolina, on June 18.

“This is a political choice that we make to allow this to happen every few months in America,” Obama said. “We collectively are answerable to those families who lose their loved ones because of our inaction.”

Bishop Robert Hoshibata, president of the United Methodist Board of Church and Society, called on United Methodists to join in “Kingdom Dreams, Violent Realities,” a three-session Bible study on gun violence for reflection and call to action.

“As faithful Christians we must approach the issue of gun violence through a theological and biblical lens,” Hoshibata said in a statement released by Church and Society. “This study will help you do just that, and this is why I am strongly encouraging United Methodists to participate.”

Hoshibata also wrote a letter to members of the Desert Soutwest Conference, which he oversees,calling for action against gun violence.

"While I personally do not believe in keeping firearms in my home, I understand that there are those who do and who are responsible owners and users of such weaponry.  I get that," Hoshibata said in the letter. "But what I cannot abide is the lack of action on the part of many to engage in respectful conversations and balanced, reasonable actions that may curb this particular epidemic: the slaughter of human persons by another human person."

The Rev. Susan Henry-Crowe, top executive of Church and Society, issued her own statement. It said in part:

"After yet another tragedy in our world involving the murder of innocent people, we find ourselves searching for answers while at the same time becoming numb to the devastation. I know that people of faith join me in the heartsickness that overtakes us after acts of senseless violence like what we saw in Roseburg, Oregon."

“In times of tragedy, the church can be a visible source of comfort and healing for those who are dealing with loss,” said Dan Krause, top executive of the denomination’s communications agency. “Our message into local media provides a voice for the people of The United Methodist Church to let those affected know that they are not alone, as well as to offer resources to help people in the community cope with the resulting grief and loss of hope.”

In addition to the ads placed in The Register-Guard in Eugene and The News-Review in Roseburg, the agency also planned digital messages.

United Methodist Men expressed their concern for those who responded to the campus shooting by rushing more than 100 copies of “Strength for Service to God and Country” to the chaplain of the Roseburg Police Department.

The nondenominational book of daily devotions is written especially for police officers, firefighters and other first responders.

Ways United Methodists can take a stand against gun violence

The Book of Resolutions of The United Methodist Church calls us to work for what we pray for: a world free from mass killings. Read More

Ways to keep the faith when the world seems wicked

There's a reason the Bible is known as the 'Good News.' These practical tips can counteract the feeling of being overwhelmed by negative news. Read More