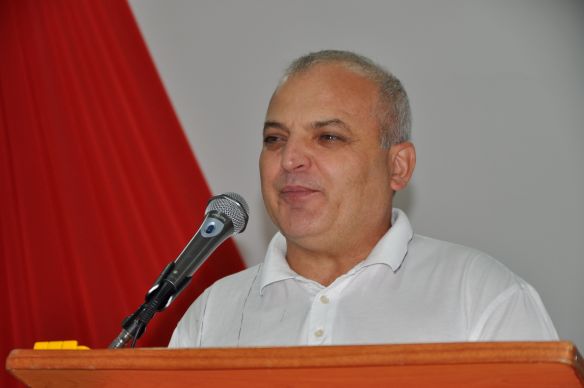 The Rev. Vasil Vuksta serves as district superintendent of Ukraine and pastor of Uzhgorod United Methodist Church in Western Ukraine.

Members of two United Methodist churches in Eastern Ukraine continue to feel the impact of fighting between rebels and Ukrainian military forces.

In an Aug. 14 letter, Bishop Eduard Khegay of the United Methodist Eurasia Episcopal Area wrote that the congregation in Lugansk has been particularly hard hit. The other church is in Krasnoarmeisk, near Donetsk.

“The bombing of Lugansk was felt by many of our United Methodist people,” reported Khegay, who is based in Moscow. “One bomb fell in the garden of the neighboring house next to our church building. The neighbor suffered and the windows of our church were broken.”

The New York Times described Luhansk as a city under siege with relentless shelling that has left residents “terrified of the bombing.”

Most of the 65-member congregation has fled the city as refugees, the bishop said, with only three elderly members remaining. Ten members moved to the Chelyabinsk region of Russia where they have found shelter and small jobs with the assistance of the United Methodist congregation in Satka.

A special offering for Lugansk church members was taken when more than 130 participants gathered for the 125th anniversary celebration of the Methodist Camp Crystal near Voronezh, Russia. The Aug. 6-10 event included a Ukraine praise group. “Praying together with and for our Ukrainian friends touched the hearts of all of us,” Khegay noted in his letter.

The pastor of the Lugansk church, the Rev. Alexandr Merziyakov, has moved with his family to Simferopol, Crimea, to live with his mother. “I am grateful that in this difficult time Alexandr looks for opportunity to start a new church in Simferopol,” Khegay said. “Please pray for the movement of the spirit in this new place of ministry.”

Last April, the denomination’s Ukraine Annual Conference voted to transfer two churches in Sevastopol and Kerch, Crimea, to the South Russia Annual Conference. The month before, Crimea had declared its independence from Ukraine and became part of the Russian Federation.

The United Methodist Board of Global Ministries has kept a watch over the situation in eastern Ukraine, in coordination with Khegay, and German United Methodists have called upon their government to support a negotiated settlement between Moscow and Kiev.

The Rev. John Calhoun, a board missionary, and the Rev. Vladimir Khabriko, are coordinating ministries to help refugees from Crimea living in Kiev. Local United congregations in other parts of Ukraine and in western Russia also are helping the displaced.

?Missionary John Calhoun offers an update on the political crisis in the Ukraine and how local United Methodist congregations are bringing relief to families displaced by the conflict. Calhoun serves in Kiev (Kyiv) in ministry with The United Methodist Church in Ukraine.

Khegay thanked the denomination for prayers and support, particularly noting the assistance from the United Methodist Committee on Relief for aid to refugees.

“As people called Methodist, we move as the Spirit moves us to be where suffering people are, to comfort those who need help, to bring food and water and to start new churches as God leads us,” he wrote.

*Bloom is a United Methodist News Service multimedia reporter based in New York. Follow her at http://twitter.com/umcscribe or contact her at (646) 369-3759 or newsdesk@umcom.org.