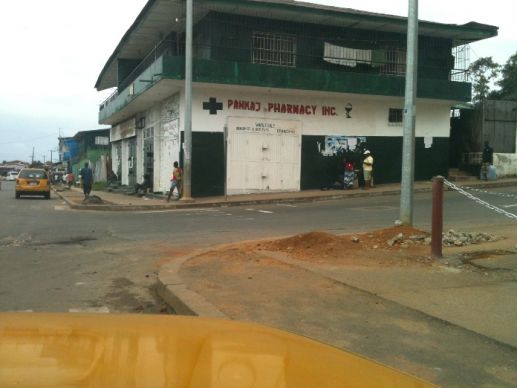 A store in Monrovia, Liberia, was closed after a nationwide curfew and other restrictions were imposed to stop the spread of Ebola. Violent protests broke out after two Monrovia neighborhoods were quarantined and people were not allowed to leave. In the rest of the city, some stores and banks were closed because of confusion about restrictions imposed by the government.

Protesters hurled rocks and stormed barricades in an effort to escape the West Point neighborhood that was cordoned off after a quarantine aimed at containing the spread of Ebola. A United Methodist pastor was among those unable to leave.

Reports indicated late Wednesday that residents were observing the curfew and the neighborhood had calmed down.

Residents of the community, the largest slum area in Monrovia, scuffled with security forces who attempted to stop a community liaison with the national government from leaving with her family. The official, Haja Miatta Flowers, now travels under heavy security.

“The protestors were actually throwing stones at Madam Flowers and her entourage, who were racing in the direction of the security forces who barricaded entrances to West Point,” said Theoway Harmon, chairman of the board of the John Kofi Ashmun United Methodist Church in West Point. “There was shooting during the scuffle and three persons were wounded, one of whom was brought into the community hospital here in West Point.” That person was moved later when the hospital was closed, he said.

The Rev. Agrippa Nyentee, pastor of Grace United Methodist Church, has been unable to get out of the neighborhood since the lockdown began. He reported traders were hiking food prices and that some people were hoarding food, especially staples like rice, for fear the lockdown will last a long time.

Residents of the community, the largest slum area in Monrovia, scuffled with security forces who attempted to stop a community liaison with the national government from leaving with her family. The official now travels under heavy security.

Residents of Monrovia woke up to a tense situation Wednesday morning after Liberian President Ellen Johnson Sirleaf quarantined West Point and Dolo’s Town and imposed a nationwide curfew from 9 p.m. to 6 p.m.

The busy shopping area of Water Street, which separates West Point from the rest of the city, was cordoned off by security forces.

Several stores and banks were closed because of confusion about restrictions imposed by the government and how people would react to those restrictions.

Over the weekend, looters raided a health center treating Ebola patients in West Point and protests turned violent there after the neighborhood, which is home to about 50,000, was quarantined, according to published news reports.

“Absolutely, no one will leave these communities and no one will go in,” said the president, who is a United Methodist, in a nationally televised address. She called on Liberians to increase their involvement in the campaign against the spread of the deadly disease.

“The fight against the spread of the Ebola virus is becoming difficult because of increased disbelief of the people, disrespect and noncompliance to some of the advice given by health workers, and the refusal of many Liberians to let go their cultural practices,” Sirleaf said.

Liberia now accounts for 576 of the 1,350 Ebola deaths in the five-month outbreak, according to the World Health Organization. The virus continues to spread in Guinea, Sierra Leone, and Nigeria, with a total of 221 new cases reported from Aug. 17-19.

“So the Ebola crisis is touching on the true cultural sense of ‘Africaness,’ ” she said. She said that is why UMCOR stresses information and training components for health boards and community health workers.

“Even the decision by the government in Liberia to cremate dead Ebola corpses has shaken the culture to its core - where this is symbolically compared to condemning them to hell,” she said.

Meanwhile, protesters in Ganta City in Nimba County on Tuesday blocked the movement of vehicles leaving the city for the provisional city of Saclepea. They were demanding the removal of bodies from their communities.

“Residents of the Ganta City in Nimba County are now fleeing the city due to the Ebola related health risk this is being created due to the failure of the County Health Team to quickly dispose of dead bodies in the around the city,” the Rev. James Labala, superintendent of the Gompa District, said in a telephone interview. The United Methodist clergyman said checkpoints have been erected at major entry points into the city and that eight bodies had not been removed by health workers.

Labala said the County Health Team in Nimba County has just one ambulance for the entire county and that it had not been back to pick up bodies since Aug. 15.

Julu Swen is a communicator for the Liberia Annual (regional) Conference of The United Methodist Church.

The United Methodist Church is responding to the outbreak of deadly Ebola in West Africa with a communications strategy aimed at saving lives and reassuring people of God’s presence. Read More

Bishop says Ebola epidemic "nearing disaster" and forces relocation of a United Methodist pastor and the closing of the UMC Mission in Kailahun District. Read More

United Methodist leaders, health care workers and the government are working to inform Sierra Leone about the danger of a deadly Ebola outbreak. Read More