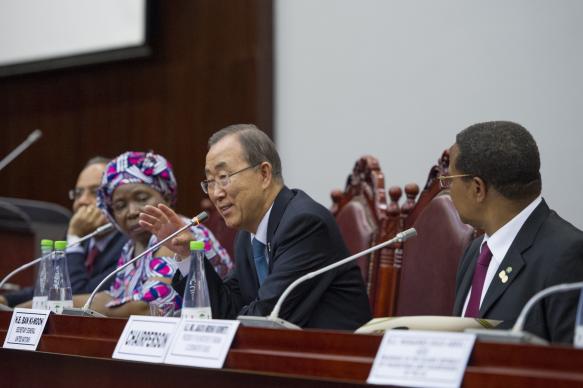 Photo courtesy of the United Nations.

U.N. Secretary General Ban Ki-moon (center right) addresses a meeting of the Committee of African Heads of State and Government on Climate Change, held on the margins of the African Union Summit in Malabo, Equatorial Guinea, in June.

United Methodists are among those planning to march in midtown Manhattan on Sunday, Sept. 21, to call for renewed action on climate change and other societal priorities that make for healthy communities.

Participants in the People’s Climate March, loosely coordinated through 350.org, hope to send a message to world leaders gathering for a U.N. summit two days later.

United Methodist staff members who are informally organizing denominational participation in the march are the Rev. Pat Watkins, Board of Global Ministries; the Rev. Kathleen Stone, United Methodist Women, and John Hill, Board of Church and Society. “We’re trying to march as a block,” Stone explained.

A Facebook Page, United Methodists at the Peoples Climate March in NYC, has been set up to provide information and a way to communicate. Those interesting in gathering also can email Watkins at pwatkins@umcmission.org.

The march begins at Columbus Circle and is expected to proceed east along the south end of Central Park before turning south on Sixth Avenue to 42nd Street, where it will continue west, ending on 11thAvenue.

The exact time of the march is still under negotiation, Stone said, but the Church of St. Paul and St. Andrew, 86th Street and West End Avenue, will be used as a pre-parade gathering spot for United Methodists.

“Solutions exist and we are already seeing significant changes in government policies and investments in sustainable ways of living and doing business,” Ban said in an Aug. 11 press release.  “The race is on, and now is the time for leaders to step up and steer the world towards a safer future.”

In 2010, governments agreed that global temperature increases should be kept below 2 degrees Celsius. The Climate Summit will focus on actions and solutions to reduce carbon emissions but is not part of the actual negotiating process for the United Nations Framework Convention on Climate Change.

Stone believes Ban feels strongly about obtaining a climate agreement and views the summit as a way for heads of state to look beyond other global disputes to get climate change on their agendas.

“This is a pregnant moment,” Stone said. “We need on-the-ground pressure.”

March organizers have been working hard to get people of color and immigrant, indigenous and neighborhood groups involved, Stone said. She considers such participation exciting and important, given the fact that climate change “is more of a reality for people of color and many immigrant groups.”

The World Council of Churches and Religions for Peace also has invited 30 religious leaders to anInterfaith Summit on Climate Change Sept. 21-22 in New York. Summit participants will adopt a statement on climate change and present it to the U.N. Secretary General in a public event at 1 p.m. Sept. 22 at the Church Center for the United Nations. Afterward, the statement will be distributed to other religious leaders and groups for signature.